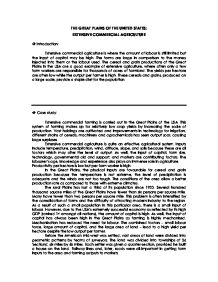 THE GREAT PLAINS OF THE UNITED STATES: EXTENSIVE COMMERCIAL AGRICULTURE ==> Introduction: Extensive commercial agriculture is where the amount of labour is still limited but the input of capital may be high. The farms are large in comparison to the money injected into them or the labour used. The cereal and grain productions of the Great Plains in the USA are a good example of extensive agriculture, where often only a few farm workers are responsible for thousands of acres of farmland. The yields per hectare are often low while the output per farmer is high. These cereals and grains, produced on a large scale, provide a staple diet for the population. ==> Case study: Extensive commercial farming is carried out in the Great Plains of the USA. This system of farming makes up for relatively low crop yields by increasing the scale of production. Vast holdings are cultivated and improvements in technology for irrigation, different strains of cereals, machinery and agrochemicals has seen output soar, causing large surpluses. Extensive commercial agriculture is quite an effective agricultural system. Inputs include temperature, precipitation, wind, altitude, slope, and soils because these are all factors which may alter the level of output. As well, the input of capital, farm size, technology, governmental aid and support, and markets are contributing factors. The labourer's age, knowledge and experience also plays an immense role in agriculture. Productivity per hectare is low but per farm worker is high. In the Great Plains, the physical inputs are favourable for cereal and grain production because the temperature is not extreme, the level of precipitation is adequate and the winds are not too tough. The conditions of the area allow a better production rate as compared to those with extreme climates. The rural Plains has lost a third of its population since 1920. Several hundred thousand square miles of the Great Plains have fewer than six persons per square mile. ...read more.

Yet it is not a system of great effectiveness. Nomadic pastoralism (pastoral farming) is less favourable to arable farming. If the grazed area has too many animals on it, its carrying capacity is exceeded or the quality of the soil and grass is not maintained, causing erosion and desertification. Livestock numbers increased can lead to overgrazing, which then results in the land being stripped of its protective grass cover, where the vegetation cannot re-establish itself, followed by soil exposed to rain and wind, finally left in desertification. Therefore, the livestock numbers is an important factor and the large amount of land in Chad must be maintained well and protected, or else productivity will only decrease. Environmental factors such as coldness vs. warmth, and dryness vs. wetness, can alter the production rate of pastoral farming. In Chad, there is little rainfall and increased drought. There is also increased evaporation of water. Animals need water to live and the limited resource of water is a problem in countries such as Chad. In conclusion, extensive subsistence farming is not very effective because it only supports the local population, or perhaps just the farmer's own family. But with limited resources and capital plus extreme weather conditions in a country such as Chad, pastoral farming is the way to go. To increase efficiency, the labour force should be increased. Advantages for the labourers are that they may be employed and earn money. The value of labour in LEDCs is regarded to be less significant than in MEDCs, thus there can be benefit both ways: labourers receive a wage; the country's economy strengthens. Capital also needs to increase, but there may be problems as Chad is an LEDC and continues to need foreign aid in terms of its economy. THE NETHERLANDS: INTENSIVE COMMERCIAL AGRICULTURE ==> Introduction: Intensive commercial agriculture is where the amount of capital is high but the input of labour is low. ...read more.

If the wages were high, then the country could not afford so many labourers. China is home to the large population in the world (1,313,973,713 people) of which 71.4% is in the working age group. These people often compete for employment and lack of labour is rarely a problem, if even at all. Although the physical input (precipitation, wind, temperature, soils) is not of the highest quality due to frequent typhoons (about five per year along southern and eastern coasts), damaging floods, tsunamis, earthquakes, droughts, and land subsidence, the conditions in China is still acceptable for agriculture. Farms are abundant since 18.86% of its land is arable land. (Only 4.57% of Canada's land is arable!) The output is currently at the stability level, where the income from outputs equals cost of inputs. Looking at China's ongoing technological improvements and developments, it is a country that can work to reach greater profit. Increased capital is necessary in order to increase production. Currently, the input of labour is strong; the input of capital is lacking. Perhaps further developments in the country's economy will pave a way for bigger agricultural success. In conclusion, the effectiveness of intensive subsistence farming in China is sitting near the satisfactory level. However, the high amount of labour should be able to produce more output with the increase of capital. Climatic conditions of floods may somewhat limit farming in certain areas of the country, but it is not a severe problem overall. The cost of labour is not too high as compared to that in the United States; therefore, the large labour force can be kept. The labour input in intensive subsistence farming is huge when compared to the other three methods of farming, but keep in mind that it is because the others have such small labour inputs. This system can be seen as effective due to its small land usage, showing that China making use of their land as best they can. China needs to strive to improve its economy and place more capital in the agricultural industry. ...read more.