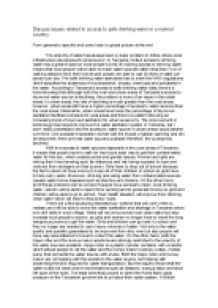 ﻿Discuss issues related to access to safe drinking water in a named country. From general to specific and come back to global picture at the end The scarcity of water has always been a major problem in Africa where local infrastructure development remains poor. In Tanzania, limited access to drinking water has a great impact on local people?s lives. By having access to drinking water means that local people will be able to reach water sources within less than 1 km of walking distance from their homes and people are able to use 20 liters of water per person per day. The safe drinking water standards has to meet the WHO regulations which specifies the absences of mycobacterial, viruses, chemicals and pollutants in the water. According to Tanzania?s access to safe drinking water data, there?s a trend showing that although both the rural and urban areas of Tanzania?s access to improved water source is declining, the problem is more of an issue in the urban areas. ...read more.

Women and girls are risking their lives traveling such far distances and risk being exposed to rape and violence from strangers on their journey. Girls have to drop out of school because the family does not have money to keep all of their children in school so girls have to help carry water. Moreover, drinking and using water from contaminated sources causes water borne diseases such as diarrhea and cholera. On the other hand, all of these problems can be solved if people have access to clean, local drinking water, women will be able to spend time working and to generate income so girls and children will be able to go to school. Their health situation will improve from drinking clean water which will lead to less doctor visits. There are a few solutions presented but I believe that only one of the is realistic and will be able to solve the water sanitation and shortage in Tanzania which is to drill wells in each village. ...read more.

But the issues remain that the water is still not clean and it has limitations such as distance, manual labor and short life span of the tools. The least beneficial project is when the World Bank adds pressure on the Tanzanian government to privatize their water system. A British corporation - Biwater took over control but made the situation way worse. People have less access to water source and the water is too expensive so people couldn?t afford the water. Finally the Tanzanian government sued the Biwater company and won. In my opinion, the Tanzanian government should have the right to make improvements in their country without being restricted by the World Bank. It doesn?t make sense to receive a loan from a Western organization and to give the money to another Western company to make the situation worse. The government should study the water infrastructure of other countries both LEDC and MEDCs. Study MEDCs for the technological aspects and LEDCs, such as Vietnam, to see how they have developed their water systems. ...read more.