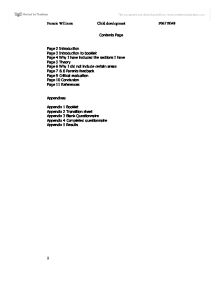 Producing an advisory leaflet - I have chosen the transitional period of moving from primary to secondary education for two reasons the first reason is that I am facing this stage in my eldest childs life at the moment,

Contents Page Page 2 Introduction Page 3 Introduction to booklet Page 4 Why I have included the sections I have Page 5 Theory Page 6 Why I did not include certain areas Page 7 & 8 Parents feedback Page 9 Critical evaluation Page 10 Conclusion Page 11 References Appendixes Appendix 1 Booklet Appendix 2 Transition sheet Appendix 3 Blank Questionnaire Appendix 4 Completed questionnaire Appendix 5 Results Introduction This is my report on the production of my transitional booklet and feedback that I received from 6 of the 12 parents I piloted it with. Introduction to booklet I have chosen the transitional period of moving from primary to secondary education for two reasons the first reason is that I am facing this stage in my eldest child's life at the moment, the second reason being is that although secondary schools provide prospectuses they do not offer information on preparing your child for this move neither do the primary schools. I have included a copy of my booklet in appendix 1. Why I have included the sections I have I have chosen things that are important to me as a parent and have also spoken to my son about things that he is worried about. I also spoke to his head and class teacher to see if they could think of things that I could include. ...read more.

I did fully cover what is expected of the children as this varies from school to school and I wanted my booklet to cover general aspects of what may be expected. I could have also included useful websites but I did consider that not all parents have access to the internet either at home or without an added expense. Parents Feedback See appendix 3 for blank copy of questionnaire See appendix 4 for returned copies of questionnaire QU 1 Did you find the booklet helpful? 5 of 6 parents answered yes I said not but offered no comment as to why QU 2 Did you understand the booklet? 5 said yes, 1 said no, the comment was that I had used words they could not understand. See point 1 in critical evaluation. QU 3 Did I include any information that you did not need to know about? 4 parents said no, 2 said yes their comments were that I had included too much information on uniform. QU 4 Would you want any information on any different areas? 5 parents said no, 1 parent answered yes the comment was that I did not cover dress code. See point 2 in critical evaluation. QU 5 do you think that this booklet will help your child through the transition of moving schools 5 parents answered yes, 1 answered no they wanted more information on how the primary school helps the child in Year 6. ...read more.

Point 5, I would say that it will depend on how your own child feels, I know my son would not do this with the whole year group but may with certain friends. I would advise that if that is how this child feels than she should do it but not all children will do this. To make my booklet as assessable to as many parents I could have said that it is available in other formats such as Braille, audio, large print and available to be translated into different foreign languages. As we live in a multi cultural society and by not doing this it would be limited to parents whose first language is English. Conclusion I found producing this booklet really interested and it made me think how hard it is for parents and children during this stage of their development, you have consider their feelings when you are making choices for them. Generally most of my parents did not write any real criticism to my booklet which did not help when having to critically have to assess myself. I would say that overall the hardest bit of this was getting the questionnaire back in the first place I actually sent out 12 questionnaires and only managed to get 6 back even though I had put a date and I had to chase several parents up a couple of times. ...read more.