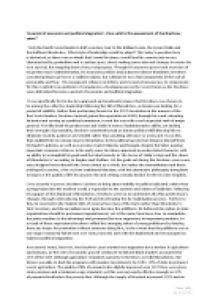 A period of economic and political stagnation. How valid is this assessment of the Brezhnev years?

﻿?A period of economic and political stagnation?. How valid is this assessment of the Brezhnev years? ?Only the fourth Soviet leader in half a century, heir to the brilliant Lenin, the tyrant Stalin and the buffoon Khrushchev. What style of leadership would he adopt?? McCauley?s question here is rhetorical, as there was no doubt that Leonid Brezhnev would lead his country into an era characterised by gradualism and a cautious pace, slowly making some selected changes to ensure his own survival, but stopping short of any real progress. Through his ascent to power and reversion of his predecessor?s administration, his economic policies and actions to silence dissidents, Brezhnev was attempting to preserve a Stalinist regime, but without its two vital components of the cult of personality and fear. His consequent reliance on bribery and excessive bureaucracy to compensate for this resulted in an epidemic of complacency developing across the Soviet Union as the Brezhnev years did indeed become a period of economic and political stagnation. It was specifically for his low key approach and moderatist stance that Brezhnev was chosen to be among the collective leadership following the fall of Khrushchev, as Russia was looking for a period of stability. ...read more.

Although the supply of livestock increased 300% and an increase in tractors reached 65% in 1965, which was later to fall to little over 6% just ten years later, the underlying problems in agriculture were left unresolved; a shortage of skilled labour, an emphasis on quantity over quality, and unsuitable roads, machinery and state quotas so that grain still had to be imported from countries like the USA and Argentina as late into the Brezhnev years as 1980. Brezhnev?s mismanagement of agriculture also created environmental problems that proved to be economically devastating; in the case of Lake Baikal, drained for irrigation, natural resources were abused to the extent that the entire area?s fishing industry collapsed. A similar outcome was the result of Brezhnev?s industrial policies, where a primary focus was put on producing consumer goods in the eighth, ninth and tenth Five Year Plans, in line with Brezhnev?s own penchant for creature comforts. The number of cars in Russia increased from 201,200 in 1965 to 1,327,000 in 1985, yet this was only a third of the number in Britain, a country with a comparably minute population. Any beneficial measures were met with limited success in practice due to massive arms expenditure, the apathy of managers already content with their lot, and huge amounts of red tape preventing much progress, ...read more.

According to one dissident, Andrei Sinyavsky, ?during Brezhnev?s time two more backwards steps were taken, and history wavered on the edge of returning to full Stalinism...but stopped short?. This was a recurrent theme of the Brezhnev years, which stopped short of any real success and could not even achieve a full regression to Stalinism. Despite Brezhnev?s ability as a leader, he led his country to what can be described at best as a period of economic and political stagnation, and at worst the period that made certain the decline of Communism. Brezhnev did not share the fervent belief of some party members, including Khrushchev, that traditional Communism was the best political system, as evidenced by his acceptance and encouragement of a corrupt and divided society through bribery, wage brackets and nepotism. Neither did he do anything to inspire this belief in their political system to the people of Russia. Volkogonov asserted that ?to enliven the moribund ideology of Communism...was quite beyond Brezhnev? and goes on to state that his image ?was not only as the harbinger of the collapse of the system, but also as the symbol of the decline of Bolshevik power, towards which the people had long become indifferent?. Although his initial gradualism and caution was merited, Brezhnev?s mistake was to allow it to descend into an economic, social and political stagnation, a corrupt complacency, and socialism, albeit slowly, fell apart. Ciara Lally 06.09.2010 ...read more.