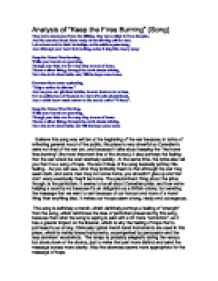 Analysis of "Keep the Fires Burning" (Song) They were summoned from the hillside, they were called in from the glen, And the country found them ready at the stirring call for men. Let no tears add to their hardships, as the soldiers pass along, And although your heart is breaking, make it sing this cheery song: Keep the Home Fires burning, While your hearts are yearning, Though your lads are far away they dream of home. Theres a silver lining, through the dark clouds shining, Turn the dark cloud inside out, 'till the boys come home. Overseas there came a pleading, "Help a nation in distress." And we gave our glorious laddies, honour bade us do no less, For no gallant son of freedom to a tyrant's yoke should bend, And a noble heart must answer to the sacred call of "Friend". ...read more.

of the war yet, and because it talks about keeping the "the home fires burning" (the most important line of the chorus), it also portrays the feeling that the war would be over relatively quickly. At the same time, the lyrics also tell you that it is a song of hope. The last 2 lines of the song basically portray this feeling. As you can see, what they probably mean is that although the war may seem dark, and some men may not come home, you shouldn't give up and that don't worry eventually they'll be home. The predominant thing about the lyrics though, is the patriotism. It seems to be all about Canadian pride, and how we're helping a country not because it's an obligation as a British colony, but ...read more.

Obviously typical march band instruments are used in this piece, which is mainly brass instruments, accompanied by percussion and the less dominant woodwinds. The tempo is probably allegretto during the versus but slows down at the chorus, just to make that part more distinct and send the message across more clearly. Also the slowness seems more appropriate for the message of hope. Overall the song really portrays the mood that this song and other from that time period had at the beginning of the war, which was mainly confidence in our troops and their fighting abilities, and about Canadian unity and pride. This obviously ends up changing by the end of the war, but this song still gives you a general idea. ...read more.