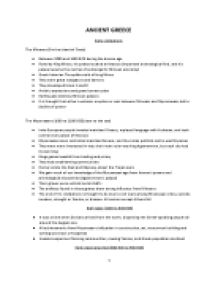 ﻿ANCIENT GREECE Early civilizations The Minoans (On the island of Crete) * Between 2000 and 1450 BCE during the bronze age * Ruled by King Minos, his palace located at Knossos (important archeological find, and his palace became the centres of exchange for Minoan economy) * Greek historian Thucydides told of king Minos * They were great navigators and farmers * They developed linear A and B * Artistic expressions and grand construction * Earthquake destroys Minoan palaces * It is thought that either a volcanic eruption or war between Minoans and Mycenaeans led to decline of power The Mycenaeans 1600 to 1100 BCE(close to the sea) * Indo-European people invaded mainland Greece, replaced language with Achaean, and took control over palace of Knossos * Mycenaeans soon controlled mainland Greece, and thus main political centre was Mycenae * They were more interested in war, their main ruler was king Agamemnon, but each city had its own king * Kings gained wealth from trading and piracy * They had small farming communities * Homer wrote the Iliad and Odyssey, about the Trojan wars * We gain much of our knowledge of the Mycenaean age from Homer?s poems and archeological discoveries (Agamemnon?s palace) * Their graves were vertical burial shafts * The artifacts found in these graves show strong influence from Minoans * The end of it?s civilizations is thought to be due to civil wars among Micenaean cities, outside invasion, drought or famine, or disease. All centers except Athens fell Dark Ages (1100 to 800 BCE) ...read more.

* Few gatherings * Corinth & Thebes were Sparta?s strongest allies * It was significant because it fortified the alliance between Sparta, Corinth and Thebes and gave Sparta more power * It was also significant because it was one of the main reasons of the cause of the Peloponnesian war PELOPONNESIAN WAR Short / long term causes * The formation of the delian league and Sparta not joining them caused tension * More tension was caused when Sparta sensed Athens becoming more powerful (?the growth of power of Athens and the alarm which this inspired in Sparta made war inevitable? * Athens tried to expand its empire in central Greece, threatening Spartan empire * Also, Athens blocked some cities from trading at Athenian controlled ports, and some members of Delian league opposed to this; and to solve problems Athens asked Sparta for help and they refused, which resulted in the outbreak of the Peloponnesian war * Helots revolt Affects: * Athens' dominance of the Greek world was shattered. It lost its empire and the tribute it exacted therefrom, so its financial superiority and consequently maintain the largest war fleet collapsed. In the short term it went through a period of internal political instability. * Sparta became the dominant power for three decades until this was broken by Thebes, after which is was not a major player. * The Greek world suffered great destruction, which allowed Persia to have a dominating say in Greek affairs. * Macedonia progressively improved its position until it became dominant, with Philip and then his son Alexander becoming Hegemon of Greece. ...read more.

Athens and Sparta united and Egypt gave up on attempting to be of impirial status. Alexander is found on reliefs and stellas throughout Egypt from Thebes to Memphis and aside from Cleopatra he was the only Mesopotamian ruler to truly rule all of his empire. * Alexander was succeeded after his death by three rulers, the most notable was Ptolemy who ruled Egypt until his death and was the first lover of Cleopatra. Mark Antony and Octavian Caesar came after Ptolemy. Alexander was the man who defeated the Persians. He died in the persuit of finding the mythical tribe of women warriors known as the Amazons who were said to reside in India. At the time it was uncharted and to them, the end of the Earth. * He provided a model for the series of Hellenistic kings that followed (3 kingdoms dominated eastern Mediterranean until the Romans came) * Egypt; Ptolemy, who was granted Egypt after Alexander?s death, succeeded in founding a dynasty which ruled the country until his most famous descendant, Cleopatra, was defeated. The Ptolemies also controlled lands outside of Egypt * Seleucid territory; the capture of Babylon by seleucus marked the foundation fo the Seleucid dynasty. Its kingdom was the largest of any other Hellenistic kingdom. However, it lost both its territories in east and west; in the east Afghanistan turned into an independent greek kingdom and there also merged the non-greek kingdom of Parthia. In the west the new greek kingdom of the Attalids formed. * Mecedon; Alexander?s dynasty was exterminated, and possession of the land was fiercely contested, until Antigonus Gonatas succeeded in establishing himself securely in power (The Antigonic dynasty ruled the country until it was conquered by Rome) ...read more.