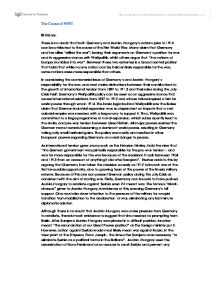 IB History: There is no doubt that both Germany and Austria-Hungary's actions prior to 1914 can be attributed to the cause of the First World War. Many claim that Germany and her allies "willed the war"; basing their arguments on Germany's position for war and its aggressive stance with Weltpolitik, whilst others argue that "the nations of Europe stumbled into war". Between these two extremes is a broad central position that holds that while no one nation can be held entirely responsible for the war, some nations were more responsible than others. In considering the controversial issue of Germany's and Austria-Hungary's responsibility for the war, one must make distinctions between their contributions to the growth of international tension from 1897 to 1913 and their roles during the July Crisis itself. Germany's Weltpolitik policy can be seen as an aggressive stance that soured international relations from 1897 to 1912 and whose failure inspired a bid for world power through war in 1914. ...read more.

Although there is no doubt that Austria-Hungary was under pressure from Germany to retaliate, there is much evidence to suggest that she needed no prompting from Berlin. After Sarajevo Austria-Hungary was placed in a difficult position, inaction meant "the renunciation of our Great Power position" as the foreign minister put it. However, action against Serbia would most likely mean war against Russia. In the view point of the Emperor, Franz Joseph, the time after Sarajevo was necessary "to eliminate Serbia as a political factor in the Balkans". Austria-Hungary used the assassination of Franz Ferdinand as an excuse to crush Serbia and prevent any further nationalistic behaviour in the Balkans. It is because of this one can argue that Austria-Hungary contributed greatly to the development of the July Crisis by lengthy delays in its response to Sarajevo, evidence in the fact that the ultimatum was only delivered a month after the incident. Allowing tension to grow within Europe as nations waited to see Austria-Hungary's response. ...read more.

Secondly, Russia was unwillingly, or unable to quell Slav nationalism, endangering the peace and stability of Europe. Russia was the first of the powers to mobilise, despite the implications of this, especially for Germany, who felt pressured by the movement of Russian soldiers on the border. Russia's promises of support to Serbia are also believed to have influenced the decision not to accept the Austrian ultimatum, leading to the Austrian declaration of war. Although many still believe that Germany willed the war, the real issue of 1914 was not a bid for world domination but the desperate need to preserve Austria-Hungary's position as a great power and ally. The charge against Germany and her allies is that they pursued in an aggressive way what was an essentially defensive posture. In particular, the fact that Germany did not make a single constructive move in July to defuse the crisis but took a number of calculated risks, "a series of gambles that did not work out". It is because of this that Germany and Austria-Hungary can be seen to be the major contributors to the outbreak of war in 1914. ?? ?? ?? ?? The Cause of WWI ...read more.