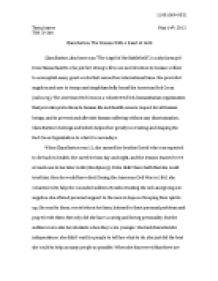 Clara Barton. When Clara Barton visited Europe in 1869, she was introduced to the Red Cross

﻿(001369-033) Tariq Ameer May 14th, 2012 TOK D-246 Clara Barton: The Woman With A Heart of Gold Clara Barton, also known as ?The Angel of the Battlefield?, is a shy farm girl from Massachusetts who put her strong will to use and devotion to human welfare to accomplish many great works that earned her international fame. She provided supplies and care to troops and singlehandedly found the American Red Cross (nahc.org). The American Red Cross is a volunteered-led, humanitarian organization that provides protections to human life and health, ensure respect for all human beings, and to prevent and alleviate human suffering without any discrimination. Clara Barton?s feelings and beliefs helped her greatly in creating and shaping the Red Cross Organization to what it is nowadays. When Clara Barton was 11, she nursed her brother David who was expected to die back to health. She cared for him day and night, and the lessons learned were of much use to her later in life (lkwdpl.org). ...read more.

This experience motivated her even more to help out. Clara Barton was courageous, enduring, and resourceful on the battlefield. She gave sympathetic aid to many and to her each soldier was an individual and merited the best possible treatment. All these traits can be seen in the Red Cross Organization, and it is what they stand for. Toward the end of the war, she found herself writing to many families who inquired about men who had been reported missing. Here, again, she recognized a pressing human need and did something practical to address it. She assisted in finding thousands of missing men, and by doing so, she anticipated the implementation of Red Cross tracing services, one of the organization?s most important activities today (redcross.org). She delivered lectures around the United States about her experiences at war, which inspired many people to like her. During one of her lectures, a man came to her and asked her what can he do to help? ...read more.

She earned many honors and medals for hard work, in helping those in suffering. At the end of Barton?s time as head of the organization, the American Red Cross provided assistance to armed forces and civilians during wartime (jonsprout.com). Clara Barton was a true pioneer as well as an outstanding humanitarian. Gender inequality, racial discrimination, and role of government shaped Clara?s thoughts about social policy and institutional reforms (rutgers.edu). Her experiences as child, in the Civil War, in the Franco-Prussian war, and reading about the Red Cross all have contributed to making Barton who she is. She had the belief in selfless concern for the well being of others, no matter who they are, which still exist in the Red Cross Organization today. She was a highly skilled speaker with a strong personality that could rally volunteers to meet whatever crises threatened the country (rutgers.edu). In conclusion Clara Barton?s beliefs became the basis and goals of the Red Cross Organization and her experiences helped in making her feelings stronger to fight for the good of the people. ...read more.