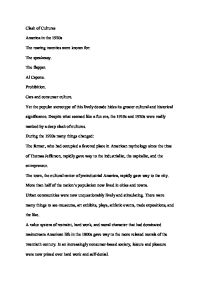 Clash of Cultures America in the 1920s The roaring twenties were known for: The speakeasy. The flapper. Al Capone. Prohibition. Cars and consumer culture. Yet the popular stereotype of this lively decade hides its greater cultural and historical significance. Despite what seemed like a fun era, the 1910s and 1920s were really marked by a deep clash of cultures. During the 1920s many things changed: The farmer, who had occupied a favored place in American mythology since the time of Thomas Jefferson, rapidly gave way to the industrialist, the capitalist, and the entrepreneur. The town, the cultural center of preindustrial America, rapidly gave way to the city. More than half of the nation's population now lived in cities and towns. Urban communities were now unquestionably lively and stimulating. There were many things to see-museums, art exhibits, plays, athletic events, trade expositions, and the like. A value system of restraint, hard work, and moral character that had dominated mainstream American life in the 1800s gave way to the more relaxed morals of the twentieth century. In an increasingly consumer-based society, leisure and pleasure were now prized over hard work and self-denial. With the old giving way to the new, there were people who were afraid of all the changes. In America, there was a general division between those who embraced the new changes and looked with hope to the future and those who idealized the past and resisted cultural change. ...read more.

Many, however, considered the new woman to be a threat to social morality and opposed the flapper, the icon of the new woman in the 1920s, and what she represented: partying, drinking, and loose morals. Racial and Ethnic Conflict: The 1920s were also marked by a high degree of racial and ethnic conflict. One of the least-remembered facts regarding the 1920s is that the second wave of the Ku Klux Klan reached its peak, with roughly 5 million members. The group persecuted African Americans, Jews, Catholics, women, immigrants, and Communists. Violence against African Americans was especially prevalent in the South. In 1922, more than 50 African Americans had been lynched. The KKK also focused much of its attention on the rising immigrant population of the cities. (These immigrants had come to work in America's factories.) Religion and Evolution: Newspapers and magazines paid close attention to the struggle over teaching evolution in public schools. Fundamentalist religious groups pressured state lawmakers to ban the teaching of evolution to schoolchildren, convinced that such teachings would weaken students' faith and contribute to what was perceived as the generally weakening moral tone of the nation. The effort to ban the teaching of evolution reached its climax in Tennessee, which became to first state to adopt this ban on evolution. From July 10-21, the trial of high school teacher John Scopes took place in Dayton, Tennessee. ...read more.

During the 1920s large, Art Deco motion-picture houses were constructed. By the mid 1920s movies had started coming out in color, and sound was added in the late 1920s. Radio and Television.. Radio, as it is known by the public, was born in the 1920s. The first commercial radio station went on the air in 1920. Between 1923 and 1930, 60 percent of American families purchased radios. Families gathered around their radios for night-time entertainment. As radio ownership increased, so did the number of radio stations. By 1929 there was a wellregulated industry of hundreds of stations. Although a commercially viable television prototype was not developed until the 1930s, a primitive form of black-and-white television was publicly demonstrated in the late 1920s, and active experimentation with color television was under way. Discovering New Galaxies. Astronomy went through a period of rapid change in the 1920s. Before the 1920s everybody, including scientists, thought that the Milky Way-the galaxy that includes our solar system-was the entire universe. By the end of the decade astronomers had found that the Milky Way was just one ordinary galaxy among a multitude of others. (As a joke, astronomers named one of the new galaxies "Snickers" to make fun of a popular candy bar named after our own galaxy.) The Big Bang Theory. Scientists also considered the universe to be fairly static (not moving), until the Big Bang theory of the origin of the universe was set forth in the late 1920s. Suddenly the universe was described as rapidly expanding and ever-changing. ...read more.