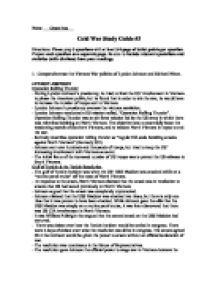 Name Grace Ives Cold War Study Guide #3 Directions: Please prep 3 questions with at least 3/4 page of bullet points per question. Prepare each question on a separate page. Be sure to include relevant quotations and statistics (with citations) from your readings. 1. Compare/contrast the Vietnam War policies of Lyndon Johnson and Richard Nixon. LYNDON JOHNSON Operation Rolling Thunder - During Lyndon Johnson's presidency, he tried to limit the US' involvement in Vietnam to please the American public, but he found that in order to win the war, he would have to increase the number of troops sent to Vietnam. - Lyndon Johnson's presidency oversaw the vietnam escalation. - Lyndon Johnson conducted a US mission called, "Operation Rolling Thunder". Operation Rolling Thunder was an air force mission led by the US army in which there was relentless bombing on North Vietnam. The objective was to essentially boost the weakening morale of Southern Vietnam, and to weaken North Vietnam in hopes to end the war. - Kennedy describes operation rolling thunder as "regular full-scale bombing attacks against North Vietnam" (Kennedy 991) - Johnson sent over hundreds and thousands of troops, but tried to keep the US' increasing involvement with Vietnam as secret. - The initial focus of the increased number of US troops was to protect the US airbases in South Vietnam. Gulf of Tonkin & the Tonkin Resolution - The gulf of Tonkin incident was when the US' USS Maddox was attacked while on a "routine parol cruise" off the coast of North Vietnam. ...read more.

- Nixon conducted covert operations with the CIA, that would help to promote Allende's opponent in Chile, to prevent Chile from being controlled by communist rule. - The CIA operations proved to be a failure when Allende was elected in 1970. But even after Allende was elected, Nixon wanted the CIA to "prevent Allende from coming to power or to unseat him" (Gaddis 174). - The mission to prevent Allende's presidency was a failure on Nixon's behalf. The CIA was unable to prevent his inauguration, and actually ended up killing the commander in chief of the Chilean army instead. - Much like in Johnson's presidency, Nixon was creating somewhat of a credibility gap. - "The gap between what appeared to be happening and what was actually happening was widening" (Gaddis 174). - Further creating somewhat of a credibility gap, Nixon formed "the plumbers". This was a group of retired detectives and former FBI and CIA members. They were ordered to perform illegal burglaries, and conduct phone taps and surveillance operations. - The group created controversy when some group members were arrested after being inside the headquarters of the Democratic National COmmittee in the Watergate building. - Nixon was also involved Vietnam, after Lyndon Johnson's escalation of action in Vietnam. - In 1973, Nixon made an agreement in Hanoi (Vietnam capitol) that the US would withdraw troops. ...read more.

- The second round of negotiations of the SALT II accords was more complicated than the first. This is because the two sides were agreeing to essentially be equal. The US and the Soviet Union had agreed to not duplicate one another's weapons, but the negotiators had to look to how they would "impose equivalent limits on weapons systems that were not themselves equivalent" (Gaddis 201). CARTER: - Jimmy Carter hoped to limit both the fighting in the war, and the usage and development of nuclear weapons in general. In his campaign for presidency he promised that he would seek "deep cuts" in strategic arsenals, rather than just "freezing" them (Gaddis 201). - The SALT II negotiations finally followed through after some controversy and setbacks, and a treaty was signed in June of 1979 in Vienna. The treaty didn't fully address the reduction of nuclear weaponry, in fact it benefited mainly the Soviet Union by allowing for improvements to be made in Soviet weaponry. - However, Carter went back on the treaty by revoking it when the Soviet Union invaded Afghanistan. Carter withdrew the treaty in retaliation to the Soviet Union, as an act of protection and opposition. - Gaddis describes Carter's withdrawing of the treaty as a "striking shift for a president who, on taking office three year earlier, had hope to bring the Cold War to an end" (Gaddis 211-212) - Carter's initial presidential goals were repeatedly being undone by responding to the Soviet Union's actions. ...read more.