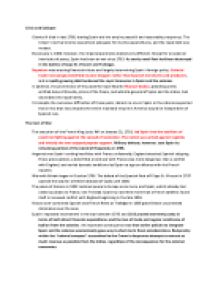 ﻿Crisis and Collapse Charles III died in late 1788, leaving Spain and the empire peaceful and reasonably prosperous. The Crown?s normal income was almost adequate for routine expenditures, and the royal debt was modest. By January 1, 1808, however, the imperial panorama looked very different. Except for occasional interludes of peace, Spain had been at war since 1793. Its costly naval fleet had been destroyed in the battles of Cape St. Vincent and Trafalgar. Napoleon was exacting financial tribute and largely determining Spain?s foreign policy. Colonial trade increasingly benefited neutral shippers rather than Spanish merchants and producers, and a rapidly growing debt burdened the royal treasuries in Spain and the colonies In addition, the prominence of the powerful royal favorite Manuel Godov, grandiloquently entitled duke of Alcudia, prince of the Peace, and admiral-general of Spain and the Indies, had discredited the royal family. Yet despite the numerous difficulties of these years, almost no one in Spain or the colonies expected that in less than two decades the entire mainland empire in America would be independent of Spanish rule. The Cost of War The execution of the French King Louis XVI on January 21, 1793, led Spain into the coalition of countries fighting against the spread of revolution. The nation was united against regicide, and initially the war enjoyed popular support. Military defeats, however, cost Spain its remaining portion of the island of Hispaniola in 1795. Angered over Spain?s ending hostilities with France unilaterally, England attacked Spanish shipping. These provocations, a belief that a land war with France was more dangerous than a conflict with England, and varied dynastic ambitions led Spain to sign an alliance with the French republic. War with Britain began in October 1796. The defeat of the Spanish fleet off Cape St. Vincent in 1797 opened the way for a British blockade of Cadiz until 1800. The peace of Amiens in 1802 restored peace to Europe once more, and Spain, which already had ceded Louisiana to France, lost Trinidad. ...read more.

Less than a week earlier, Prince John and the royal family; administrative, ecclesiastic, and military hierarchies; and numerous nobles?some ten thousand to fifteen thousand people in all sailed to Brazil under British escort with the royal treasury, official records, and a printing press. As a result of this unprecedented move, from 1808 to 1821 John ruled his empire from Rio de Janeiro rather than Lisbon. Napoleon?s second decision was to withhold recognition of Ferdinand as monarch, to rid Spain of the Bourbons, and to place a ruler of his own choosing on the Spanish throne. At Bayonne, Napoleon demanded and obtained on May 6 an abdication from Ferdinand in favor of Charles. He had already persuaded Charles to abdicate in favor of himself. For six years Ferdinand remained in exile in France. Napoleon then placed his brother Joseph, on the Spanish throne. The French emperor?s decision to remove the Bourbons from Spain provoked an unprecedented constitutional crisis that soon spread to the colonies. Spanish Government of Resistance, 1808-1814 The majority of Spaniards refused to acknowledge the legitimacy of orders issued by Napoleon?s representatives in Spain or the Spanish officials who worked with them. In the absence of a monarch, sovereignty had returned to the people to be exercised by their representatives. Provincial juntas were formed by the end of May to oversee resistance to the French and rule in the name of Ferdinand until his return to Spain. Hesitant members of the traditional elite found themselves forced to take control and provide leadership or face violent removal and possibly death. The defeat of the French at Bailen in Adalusia in July 1808 led Joseph Bonaparte to withdraw temporarily from Madrid. By late August the provincial juntas had agreed to create a single body?the Central Junta ? for retaining the colonies. The Central Junta convened (came together) in Aranjuez in September 1808, but military defeats drove it to Seville in December. ...read more.

Progressively moving beyond the positions taken in 1812, the new gov not only abolished once more the administrative institutions of the old regime, but also launched an attack on the privileges of the church and the military. In mexico, in particular, these reforms led many representatives of the elite to reassess their opposition to independence. Everywhere in the colonies where Spanish armies and loyalist governments persevered, these actions divided and weakened the forces opposing independence. The events of 1808-14 had first raised and then dashed the expectations of equality and substantive changes in the colonial relationship. Although in 1814 most members of the colonial elites in regions still under Spanish control were prepared to give Ferdinand a chance to end the conflicts in rebellious regions and to accept absolutist rule rather than the unknown risks of independence, nothing occurred btwn 1814 and 1820 to strengthen the bond btwn monarch and subjects. On the contrary, the gov?s resort to force alienated its former supporters, as taxes and the direct expropriation of property were clearly not in the loyalists? interests. The same desire for self-preservation that initially led elites to continue their loyalty to the crown as the best protection against social upheaval now led them to abandon a crown unable to maintain its authority in Spain itself. Portugal There was little immediate resistance to the French invasion of Portugal. With the court safety in Brazil, most of the elite that had remained began to accommodate to the new order. When news of the popular uprisings in spain reached Portugal in 1808, however, a popular revolt began. British naval forces that had already established a blockade moved to support this anti-french rising. Soon a military force composed of british regulars and Portuguese volunteers cleared the French from most of the kingdom. French invasions in 1808,09,11 however caused extensive property damage and perhaps nearly 250,000 portuguese deaths. The nation?s already-weak transportation system was particularly hard hit, and as a result, commerce suffered. By the time the French were finally expelled, the Portuguese treasury was encumbered with debt, and the economy was in crisis. ...read more.