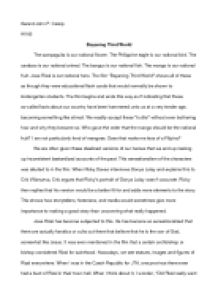 Discuss the Depiction of the Philippines and Jose Rizal in the film &quot;Bayaning Third World&quot;.

﻿Gerard John P. Caisip Hi165 Bayaning Third World The sampaguita is our national flower. The Philippine eagle is our national bird. The carabao is our national animal. The bangus is our national fish. The mango is our national fruit. Jose Rizal is out national hero. The film ?Bayaning Third World? shows all of these as though they were educational flash cards that would normally be shown to kindergarten students. The film begins and ends this way as if indicating that these so-called facts about our country have been hammered unto us at a very tender age, becoming something like stimuli. We readily accept these ?truths? without even bothering how and why they became so. Who gave the order that the mango should be the national fruit? I am not particularly fond of mangoes. Does that make me less of a Filipino? ...read more.

When I was in the Czech Republic for JTA, one province there even had a bust of Rizal in their town hall. When I think about it, I wonder, ?Did Rizal really want this?? Or I guess the more important question is, does he deserve all these recognitions? ?Bayaning Third World? opens the eyes of its viewers, proclaiming that in order to truly understand our history, we must learn to continuously doubt and question it. In the movie, two filmmakers are trying to investigate on who Jose Rizal really was. Was Rizal really against the revolution, or was he just resentful because he knew he wouldn?t be the hero if he took part in it? Did Rizal truly love Josephine Bracken and was he willing to marry her? Was Josephine sent by the priests to spy on Rizal? ...read more.

However, does it really matter? We know what Rizal has done, and we know that he has contributed greatly to our freedom as a nation. Personally, the truth about his retraction will not change how I see him. It?s like Dan Brown?s Da Vinci Code wherein the issue of Jesus having a child with Mary Magdalene was being investigated. Whether or not Jesus had a child doesn?t really change anything about Him. Same goes for Jose Rizal and his retraction. The term ?Kanya-kanyang Rizal? is used at the end of the movie. This simply means that we see Rizal in our own way, and he has affected us according to our understanding of who he was. His influence on us and this country can never be disregarded. These questions and investigations are what keep our history alive. History, after all, is just a collection of the past subject to our own interpretations. ...read more.