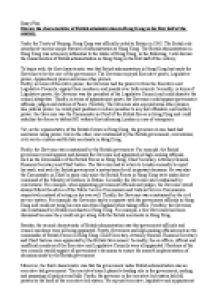 Secondly, the ex-officio, official and unofficial members of the Executive and Legislative Councils were all appointed. Members of the two councils would support all government?s decisions to ensure the smooth implementation of decisions made by the British government. Moreover, the third characteristic was that the government under British administration was an executive-led government. The executive branch played a leading role in the government, making and proposing all policies and bills. Firstly, the governor in the executive-led system held all powers as the head of the executive-led system. He enjoyed executive, legislative and appointment power, presided over the two councils and had certain judiciary and military power. Secondly, the Government Secretariat held the power to initiate legislation. The Government Secretariat proposed legislation to the Governor. It was then approved by the Executive Council before drafting into bills by the Legal Department, and passed back to the Executive Council for evaluation. Thirdly, under the executive-led system, the governor used to appoint the same senior government officials to the Executive and Legislative Councils in order to ensure policies could be carried out smoothly and efficiently without opposition. In addition, the fourth characteristic was that British merchants exerted enormous influence upon British administration in HK. ...read more.

Besides, British also implemented Western education and made English the official language. On the other hand, however, the British government did adopt some conciliatory measures. For example, Chinese traditions and customs were kept and all traditional laws relating to family, marriage and inheritance remained effective until even the late 19th century, while high-ranking government officials had Chinese names. Finally, the government also attempted to conciliate the Chinese by entrusting Chinese associations like Tung Wah Group of Hospitals and paid due respect to Chinese leaders such as Robert Hotung and Chow shouson by awarding them noble titles. To analyze, the British government introduced much of its tradition British style of ruling to Hong Kong and had exerted enormous influence towards the Chinese community. To pacify the Chinese, the British administration did attempt to build a good relationship with Chinese associations, but the inclusion of local Chinese was kept minimal. To conclude, there were six major characteristics of British administration in the first half of the 19th century, namely, the governor as the core of the government; the British government appointing all government officials and council members; the government being an executive-led government; great influence by the British merchants; Consulting Chinese associations and the adoption of both oppressive and conciliatory measures. ...read more.