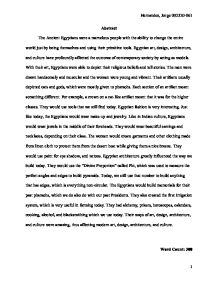 Wool and cotton were also being used, although the wool would be warm, it would be used because the oils in it would repel any water touching it, while cotton was light, but not as light as linen. In modern society, people want to be comfortable yet fashionable, and mainly use scissors and a needle to wove the fabrics together, just like in those ancient times. With these tools and fabrics, the women would create clothing for people, depending on the climate and their social status. Tattoos were well known throughout ancient times, in which mostly everyone had a tattoo. They would put tattoos of gods or any other religious belief on their bodies, such as some people put on tattoos of a cross. Wigs and hairpieces were also very popular back in those times. They would be made of human hair and were complimented well with hairpieces such as a short fine tooth comb, hair pin, or a small bronze hair curler. Because they had no soap, they would use oils to beautify and soften their skin, which also blocked off excess sunlight and prevented ailments that occurred because of dried skin. The Egyptians were a big fan of perfumes; they used three methods to extract the scent, they are: 1) enfleurage, which was basically soaking a well scented flower or fruit in fat, 2) maceration, which was the same as enfleurage, except it was heated up to 65 degrees Celsius when dipped into the fat, and 3) extract the essence the way wine makers extract the fruit, pulverizing them. They wore eye makeup, commonly known today as eye liner and such, was also used back then to mask the skin surrounding the eye with black paint. As noticed, most of the eye liner used today is black, just like the most popular eye makeup from those ancient times. Green was also used, but the basic idea was to look beautiful, which is the basis for fashion. ...read more.

Though this might be seen as funny, the Egyptians founded beer making by the help of a god, Osiris. They also introduced wine making by squeezing the fruits and placing a pot under the whole of a giant bucket-like barrel, in which the juice would drip into the pot. Wine and beer was only drank for celebrating purposes, mainly for religious reasons, and was rarely used as a meal beverage. The ancient way of bread making is very similar to how it is done now. The women back then would ground wheat into flour, then further, brutally that is, pounded to fine grain, at which they either added an extra ingredient to enhance the flavor of the bread (like raisins or honey) or they would put it straight into their clay ovens and let it cook. The bread was part of the Egyptian balanced diet, which is in modern balanced diets as well, and was also used for religious purposes. In ancient times, it was used to represent the importance of a stable diet, in modern times it is symbolic of Jesus Christ's body. Not all religions practice this, but religions such as Catholicism does; they eat the bread and drink the wine, which represents Jesus Christ's blood. Conclusion From what has been happening in society and all the discoveries being made about Ancient Civilizations, the society, in the future that is, will be even more affected by the Egyptian ways than it is now. The Egyptians, with their wacky life styles, presented the world with materials and artifacts that have never been created. They truly were the stepping-stones of modern society. They have been working on life changing, so to say, tools that will always be used and will be constantly worked upon to upgrade them. Their ways of art, design, architecture, and culture were amazing, thus effecting modern art, design, architecture, and culture. As the years pass by, modern society will keep being affected by societies of the past. ...read more.