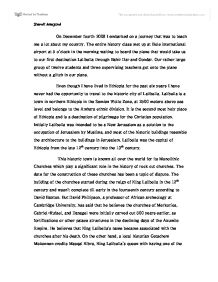 On December fourth 2008 I embarked on a journey that was to teach me a lot about my country. The entire history class met up at Bole international airport at 5 o'clock in the morning waiting to board the plane that would take us to our first destination Lalibella through Bahir Dar and Gondar. Our rather large group of twelve students and three supervising teachers got onto the plane without a glitch in our plans. Even though I have lived in Ethiopia for the past six years I have never had the opportunity to travel to the historic city of Lalibella. Lalibella is a town in northern Ethiopia in the Semien Wollo Zone, at 2500 meters above sea level and belongs to the Amhara ethnic division. It is the second most holy place of Ethiopia and is a destination of pilgrimage for the Christian population. Initially Lalibella was intended to be a New Jerusalem as a solution to the occupation of Jerusalem by Muslims, and most of the historic buildings resemble the architecture to the buildings in Jerusalem. Lalibella was the capital of Ethiopia from the late 12th century into the 13th century. This historic town is known all over the world for its Monolithic Churches which play a significant role in the history of rock cut churches. The date for the construction of these churches has been a topic of dispute. The building of the churches started during the reign of King Lalibella in the 12th century and wasn't complete till early in the fourteenth century according to David Baxton. But David Phillipson, a professor of African archeology at Cambridge University, has said that he believes the churches of Merkorios, Gabriel-Rufael, and Danagel were initially carved out 500 years earlier, as fortifications or other palace structures in the declining days of the Axumite Empire. He believes that King Lalibella's name became associated with the churches after his death. ...read more.

We also saw the stele that had been stolen by the Italians during their five year occupation and hadn't returned till a year ago. It is the tallest stele standing at the site now. It is a wonder that it took this long for the stele to be returned to the right full owners. I think the fact that it was returned symbolizes Ethiopia's moving forward and standing on the same level with other western countries. It signifies the respect that is extended to Ethiopia and its people. After we had finished looking at all the steles we moved into the museum that was located at the back of the location. This museum holds many archeological findings from pre-Axumite, Axumite and post Axumite periods in time. The Axumite Empire ranges from the second century B.C. to the seventh century A.D. whereas the pre-Axumite empire ranged between 7th century BC to the 2nd century BC. And the post Axumite is after the seventh century. These findings include a lot of coins and pottery. After this we all headed to the palace of King Kaleb. This was situated beautifully at the top of a small hill. King Kaleb had ruled over Yemen for along time. After he deserted the Islamic people he became a monk in Ethiopia. He completely he disregarded his political rule. The monastery taught its subjects to be humble and that it was not necessary to be financially well off. On our way back to the hotel we saw the bath of Sheba that is now used during the holiday of "T'imket" or Epiphany. The next day we started our journey to Adwa that is a region in Ethiopia not far from Axum where the Italians were defeated by Ethiopians during their attempted invasion in 1889. The Battle of Adwa was a disgrace to Italians because a great power like Italy was defeated by a primitive army that wasn't well trained or properly equipped. ...read more.

When at last they told him what they had done he asserted that they could not have succeeded in so bold a venture unless God had willed its outcome. Therefore he agreed that the Ark should remain with them. Thus Menelik brought the Arc to Ethiopia, to the sacred city of Axum, where it has remained ever since. Writing in his meticulously researched book, The Sign and the Seal (concerning his search for the lost Arc of the Covenant), Graham Hancock suggests that the Arc, and more precisely its mysterious contents, may have been a product of ancient Egyptian magic, science and technology. Moses, being highly trained by the Egyptian priesthood, was certainly knowledgeable in these matters and thus the astonishing powers of the Arc and its "Tablets of the Law" may have derived from archaic Egyptian magic rather than the mythical god Yahweh. In past centuries, the Arc of the Covenant was brought out during important church festivals. The arc is protected and only seen by one man. He is a priest that has dedicated his life to the arc. According to legends and local believers, if any one were to see the arc they would explode in flames on the spot. The guard of the arc is selected from candidates that have vowed their pure faith and loyalty to the arc. Because no one except for the guarding priest has ever seen the arc, the existence of it is questioned by many. This trip has been very educational for me, and I am so glad I went on it. Although I felt the "Ethiopian Pride" before now I know why I feel it. The feats achieved by the Ethiopian people are unheard of anywhere else in the world. Many of Ethiopia's treasures were revealed to me and in the future I am hoping that I will observe many more. The preservation of the artifacts is something that I think has to be worked on. If we want future generations to be able to witness these relics preservation is the key. Shewit Aregawi ...read more.