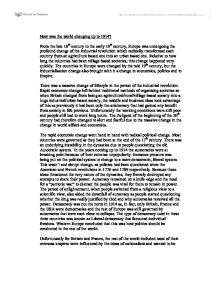 Europe: How was the Was Europe changing up to 1914?

From the late 18th century to the early 19th century, Europe was undergoing the profound change of the industrial revolution which radically transformed each country from an agriculture based one into an urban based one. Relative to how long the countries had been village based societies, this change happened very quickly. The countries in Europe were changed by the mid 19th century, but the industrialisation change also brought with it a change in economics, politics and in Empire.

There was a massive change of lifestyle in the period of the industrial revolution. Rapid economic change left behind traditional methods of organising societies so when Britain changed from being an agricultural/rural/village based society into a huge industrial/urban based society, the middle and business class took advantage of this as previously it had been only the aristocracy that had gained any benefit from society in life previous. Unfortunately the working conditions were still poor and people still had to work long hours. The Zeitgeist of the beginning of the 20th century had therefore changed to alert and fearful due to the massive change in the change in world affairs and economics.

The rapid economic change went hand in hand with radical political change. Most countries were governed as they had been at the end of the 17th century. There was an underlying instability in the dynasties due to people questioning the old Autocratic system.  In the years coming up to 1914 the autocracies were at breaking point because of their extreme unpopularity. Immense pressure was being put on the political system to change to a more democratic, liberal system.

This wasn’t and abrupt change, as policies had been questioned since the American and French revolutions in 1776 and 1789 respectively. Because these ideas threatened the very nature of the dynasties, they fiercely destroyed any attempts to share their power. Autocracy remained on a knife-edge and the need for a “patriotic war” to distract the people was vital for them to remain in power.

The period of enlightenment, when people switched from a religious view to a scientific view, also aided the downfall of autocracy as people started questioning whether the king was really justified by God and why autocracies received all the power. Democracy was not the norm in 1914 as, In fact, only Britain, France and the USA were democracies and the rest of Europe was still governed by autocracies that were each close to collapse. The type of democracy used in these three countries was known as Liberal democracy that favoured individual freedom. Western Europe concluded that this was how politics should be conducted in the rest of the world.

Unfortunately for Britain and France, the rest of the world included most of their overseas empires were influenced by the ideas of nationalism and wanted to be governed by their own people. These overseas empires were greatly important to both Britain and France as they contained key trading routes. Unlike other continental empires, Britain and France found it easier to keep a hold on their colonies then other continental empires as ideas liberating ideas permeated and destroyed continental empires from the inside. Unfortunately, the struggle that Britain and France had clinging onto their colonies made it harder for them to deal with the threats posed towards them. One such threat was that of the Kaiser wanting Germany to expand and create his own overseas German empire. Undoubtedly, Britain and France would do anything to stop Germany getting a share in their power and so this pressured Britain into joining in an alliance with Russia and France against Germany and the Austro Hungarian Empire. Britain naturally wanted to remain in the hey-day of the Pax-Britannica whereby they kept the peace in the world. They also wanted to keep naval supremacy which earned at the end of “The Battle of Trafalgar”.

However, the days of Pax – Britannica were in the years coming up to 1914. The new giant of the century was America who was just waking up at the beginning of the 20th century. However, America was driven by trade and it saw empires as economically restricting and so, therefore, wanted to dismantle the European empires. This was contrary to the French and British overseas empires which survived on the basis of trade unlike the continental empires in Europe. Economically, America was starting to become a very powerful country which became a good influence due to its principles of liberalism; this meant that any person possessed the rights of an individual and could trade freely from economics and democratically elect the government for the people, by the people.

In conclusion, the way the world was changing up to 1914 economically was that because of industrialisation, businesses started, factories grew cities around them and economy was altered massively as societies were used to village life that had continued, unchanged, for centuries. The world changed politically up to 1914 as autocracies crumbled and ideas of liberalism and nationalism took hold in peoples minds. This being due to the mind set changing from a philosophical perspective towards much more evidence driven societies that asked the question “why should we be ruled autocratically?” The world changed in terms of empires up to 1914 because of the crumbling continental empires just managing to hold onto their power contrast wholly with the power empires had in the 17th and 18th  century.

Britain and France were desperately hanging on to their overseas colonies. And so the zeitgeist of the late 19th century and the early 20th century was that of fear, the fear that any more change to Europe might result in cataclysmic consequences and so each country frantically held onto the past.