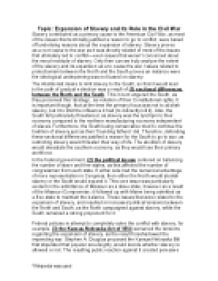 Expansion of Slavery and its Role in the US Civil War

﻿Topic: Expansion of Slavery and its Role in the Civil War Slavery contributed as a primary cause to the American Civil War, as most of the issues that terminally justified a reason to go to conflict, were based off underlying reasons about the expansion of slavery. Slavery proves as a root cause to the war as it was directly related of most of the issues that ultimately led to conflict?even issues that weren?t concerned about the moral rectitude of slavery. Only then can we truly analyze the extent of the slavery and its expansion as a to cause the war. Issues related to protectionism between the North and the South proves an instance were the ideological underpinning was not based on slavery. The Abolitionist desire to limit slavery to the South, so that it would lead to the path of gradual extinction was a result of (1) sectional differences between the North and the South. This in turn angered the South, as they perceived this ?strategy?, as violation of their Constitutional rights. ...read more.

Eventually, the popular reaction did came due to propagation through the political leaders. Therefore, the Act divided the nation and pointed it toward civil war as it effectually nullified the Missouri Compromise of 1820 and the Compromise of 1850. The resulting turmoil over the act split both the Democratic and Whig parties and thus, gave rise to the Republican Party, which split the United States into two major political camps; North to be Republican and South to be Democratic. As a result of the Kansas-Nebraska Act, (4) Bleeding Kansas ensued in 1854-1861, which was known as a series of violent political confrontations involving anti-slavery and pro-slavery conflicts, which took place in the Kansas Territory. The reason for conflict was over the issue of Kansas entering the Union as a free state or slave state. What happened here in Kansas epitomized the sectional controversy between the North and South. The events it encompasses directly presaged the American Civil War as it elevated tensions regarding the expansion of slavery into the west. The root cause of this conflict was purely motivated by slavery and its expansion?slavery was once again the underlying reason that justified all of these conflicts. ...read more.

They advocated their ability to sell and buy cotton from any nation. On the contrary, Northern states had heavily invested in their manufacturing, however they could not compete with the industries of Europe who offered high prices for cotton imported from the Southern states while getting low prices for manufactured exports in return. As a result, the Northern states supported tariffs and protectionism because it helped them survive. The Democrats in Congress, controlled by Southerners kept reducing rates so that the 1857 rates were the lowest. The South had no complaints but the low rates in turn angered Northern industrialists, who demanded protection for their growing industries. Even political opposition to the Democrats involved the Whigs and Republicans favoring high tariffs to stimulate industrial growth. As a result of their beliefs, the Republicans called for an increase in tariffs in the 1860 election to promote their industrial economy. This was another issue that provided the South with an incentive to secede, as only through secession they would gain to ability to freely trade with anyone they chose for lower prices. Lincoln?s election in 1860 would only guarantee protectionism. This issue of protectionism in the United States shows the extent to which slavery was not pertinent in causing the war. *Wikipedia was used ...read more.