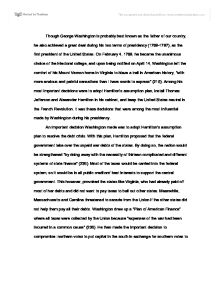 Though George Washington is probably best known as the father of our country, he also achieved a great deal during his two terms of presidency (1789-1797), as the first president of the United States. On February 4, 1789, he became the unanimous choice of the Electoral college, and upon being notified on April 14, Washington left the comfort of his Mount Vernon home in Virginia to blaze a trail in American history, "with more anxious and painful sensations than I have words to express" (215). Among his most important decisions were to adopt Hamilton's assumption plan, install Thomas Jefferson and Alexander Hamilton in his cabinet, and keep the United States neutral in the French Revolution. It was these decisions that were among the most influential made by Washington during his presidency. An important decision Washington made was to adopt Hamilton's assumption plan to resolve the debt crisis. With this plan, Hamilton proposed that the federal government take over the unpaid war debts of the states. By doing so, the nation would be strengthened "by doing away with the necessity of thirteen complicated and different systems of state finance" (236). ...read more.

The decision to adopt Hamilton's assumption proposal created a significant impact on the Union's economic status. Another significant decision Washington made during his presidency was to appoint Thomas Jefferson and Alexander Hamilton as Secretaries of State and Treasury, respectively. After all, "Hamilton and Jefferson were born to hate each other" (232). Though these appointments undoubtedly caused much conflict, some of it worked out for the betterment of hte country. THey competed for Washington's favor and attention, though Washington displayed a sense of fairness unparalleled by many of his presidential successors, not letting friendship bias his decisions. He chose his cabinet based on ideals htat appealed to him, not just popular leaders in his party. "Only Washington transcended the dichotomy, wishing to gather equally from both systems what he considered most useful" (249). By having Jefferson and Hamilton simultaneously hold offices, partisanships grew, eventually influencing politics today. Though this was a significant and important decision in American history because of hte message Washington tried to convey, it may not have completely been a wise one, for the two lost much time bickering instead of working. ...read more.

Joining any war would have exhausted the young nation's resources, and Washington was wise in making that decision. Throughout his life, George Washington was a charismatic, influential man who made many good decisions, along with his share of bad ones, all of which influenced the fate of America. He adopted a compromised form of Hamilton's assumption plan, thus creating a way to pay the national debt while pleasing all the states. He also appointed Thomas Jefferson and Alexander Hamilton to his cabinet, even though they had very different views about things, creating a deeper chasm between their parties, and shaping politics for years to come, while displaying that it does not always matter what party a person comes from if they have a good idea that can help the country. Washington also managed to keep the United States neutral in the French Revolution, defining foreign policy of the future and giving the young nation an opportunity to grow before getting involved in overseas affairs. George Washington's role as a founding father did not only consist of crossing the Delaware, but also many other important decisions crucial to the development of the young United States. ...read more.