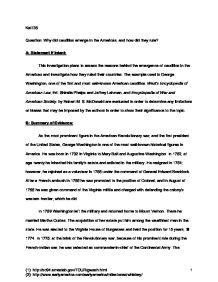 Kai DS Question: Why did caudillos emerge in the Americas, and how did they rule? A: Statement if Intent: This investigation plans to assess the reasons behind the emergence of caudillos in the Americas and investigate how they ruled their countries. The example used is George Washington, one of the first and most well-known American caudillos. West's Encyclopedia of American Law, Ed. Shirelle Phelps and Jeffrey Lehman, and Encyclopedia of War and American Society. by Robert M. S. McDonald are evaluated in order to determine any limitations or biases that may be imposed by the authors in order to show their significance to the topic. B: Summary of Evidence: As the most prominent figure in the American Revolutionary war, and the first president of the United States, George Washington is one of the most well-known historical figures in America. He was born in 1732 in Virginia to Mary Ball and Augustine Washington. In 1752, at age twenty he inherited his family's estate and enlisted in the military. He resigned in 1754; however, he rejoined as a volunteer in 1755 under the command of General Edward Braddock. After a French ambush in 1755 he was promoted to the position of Colonel, and in August of 1755 he was given command of the Virginia militia and charged with defending the colony's western frontier, which he did. ...read more.

The fact that the information present was gathered by multiple people, and refined into a usable source reduces the chance of any individual's biases being reflected in the material, making this an excellent source, relevant to this investigation. Encyclopedia of War and American Society, similar to West's Encyclopedia of American Law, is a collection of information concerning American involvement in various wars, as well as the effects of involvement, both geopolitical, and social. The nature of this work is focused in a way that both presents facts and events, and analyzes them to indicate the various effects they had on the United States. With this presentation of the author's analysis as fact, it is necessary to use this work with some caution, due to fact that personal bias may have had some influence upon it. D: Analysis: Though he is not often thought of as such, George Washington is a perfect example of a caudillo, standing as the largest example of one in the U.S. beside Andrew Jackson. He was an extremely successful military man, as well as being charismatic, and loved by the people. The definition of a caudillo is most simply a military leader; translated literally from Spanish it means warlord, or strongman. ...read more.

In doing so, he showed that the new government would enforce its laws and that it, as well as he himself, was not weak. In the case of the Jay Treaty, signed in November 1794, Washington chose to solve the problem of continued antagonization by the British with diplomacy rather than force. He felt that if all possible, armed conflict with Great Britain should be avoided. He felt that the civilian militia, while powerful enough to put down a small rebellion, would not do well against the professional British army. And despite criticisms calling him weak, or cowardly, he was able to keep America out of a situation for which it was unprepared, and continue to ensure its success till he stepped down. E: Conclusion: Washington, throughout his entire life, remained entirely dedicated to the cause of his country. He served the British in the Seven Years War, making a name for himself, and then served the Colonies, becoming the first American caudillo. Rather than taking power for himself and destroying the liberty the Revolution was fought to protect, it was given to him by the people and then returned by him after eight years of firm but fair governance, an occurrence rare within the Americas. With his death, the American people mourned the loss of the Father of their Country. F: Bibliography: West's Encyclopedia of American Law Ed. Shirelle Phelps and Jeffrey Lehman. Vol. 10. 2nd ed. Detroit: Gale, 2005. p300-302. ...read more.