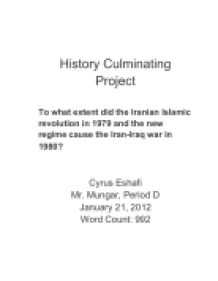 History Source Analysis. To what extent did the Iranian Islamic revolution in 1979 and the new regime cause the Iran-Iraq war in 1980?

This source is valuable, because it comes from a conscript soldier, which may mean that his opinion was not altered by emotion. This makes his opinion on the subject less biased. This source is limited, because the interview was conducted 30 years after he fought in the war. This could mean that much of his memory on the war was lost as the years went on, making the information incomplete. (Source number 5) This print source was written in 1983 by Dr. Shirin Tahir-Kheli, a Pakistani-American political scientist and ambassador in. The purpose of her book was to explain the long history of conflicts between Iran and Iraq, and how the Iran-Iraq war originated. Dr. Kheli is a political scientist which means her analysis and understanding on the war is valuable. Also, she wrote her book in 1983, just a few years after the outbreak of the war. This means the information she used was accurate, because it was recent at the time. ...read more.

(An example of this is when Iran broke the Algiers agreement, in an attempt to acquire wealth.) The war was also caused by the Iranian revolution itself. After the revolution, the army had collapsed, and Hussein used this opportunity to attack the seemingly "weak" Iran. E) In conclusion, the actions and greedy intentions of the Islamic regime in Iran caused the Iran-Iraq war in 1980. Instead of building the economy diplomatically, the regime insisted on acquiring wealth through force and violence. Due to actions such as the breach of the Algiers agreement, the Iranian regime angered many Iraqis. Also, with ill-conceived acts such as holding American diplomats hostage, Iran also lost the support of the international community. The Islamic revolution in Iran is central to the Iran-Iraq war, because the causes that were found all relate to the actions of the Islamic regime. The attempt to export the revolution caused mayhem and violence in Iraq and Saddam Hussein was simply defending the sovereignty of his country in order to prevent his own loss of power. ...read more.