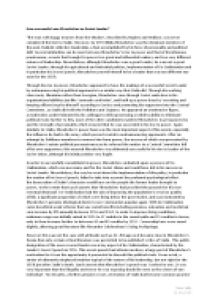 How successful was Khrushchev as Soviet Leader?

﻿How successful was Khrushchev as Soviet Leader? ?The man with baggy trousers from the Ukraine?, described by Hughes and Wallace, was never considered the heir to Stalin. However, by 1955 Nikita Khrushchev was the dominant member of the post-Stalinist collective leadership, a feat accomplished by his force of personality and political skill. Several similarities can be seen between Khrushchev?s rise to power and that of his infamous predecessor, a route that brought to power two great and influential Leaders, and two very different natures of leadership. Nevertheless, although Khrushchev was a great Leader, he was not a great Soviet Leader; through his agricultural and industrial policies, implementation of De-Stalinisation and in particular his Secret Speech, Khrushchev proved himself to be a leader that was too different too soon for the USSR. Through his rise to power, Khrushchev appeared to have the makings of a successful Soviet Leader by outmanoeuvring his political opponents in a similar way that Stalin did. Through his working class roots, Ukrainian rather than Georgian, Khrushchev rose through Soviet ranks due to his organisational abilities just like ?comrade card index?, and built up a power base by ?recruiting and keeping officers loyal to himself? according to Service and promoting his supporters into the Central Committee , as Stalin did with the Politburo and Orgburo. He appeared an unobtrusive figure, a moderatist, underestimated by his colleagues whilst possessing a ruthless ability to eliminate political rivals; further to this, none of the other candidates matched Khrushchev in persuasiveness and the strength of personality which ensured that he was successful in his rise to power. ...read more.

Khrushchev?s real chance to consolidate his power and unite the party rather than divide it was with his agricultural policies. The emphasis he put on food production rather than heavy industry was enough of a difference to clearly outline a different domestic approach to that of Stalin, and with this instead of the secret speech, Khrushchev?s colleagues may well have been more united behind him for the Virgin Land scheme as they were forced to admit collectivisation was not successful. Until the Virgin Land scheme, all signs pointed to Khrushchev having a success in agriculture that Stalin never achieved. He was in touch with his peasant roots, spent time in the countryside with them throughout his career, and was very motivated and enthusiastic to pioneer a new agricultural policy for the USSR. Despite this, ?enthusiasm was not enough? asserts Service, ?it could not make up for lack of detailed planning?; this lack of detailed planning was to become a constant recurrence throughout the Khrushchev era. His leadership style was to lead with inspiration and intuition, leaving the toothcomb to someone else to check the legitimacy of policies. Another leadership trait was his close personal involvement with schemes; according to Lynch, ?this close personal involvement had its obvious advantages, but it also made him vulnerable...when policies failed he appeared directly responsible in a way a less energetic leader would not have been?. This was the case with the Virgin Land scheme, where Khrushchev inspired hundreds of thousands of young Russians to immigrate to Siberia and cultivate previously unused land, without stopping to think that it was unused for a reason. ...read more.

Despite the increase in consumer goods, the legacy of Stalin?s Russia was such that industrial success was judged in terms of iron and steel output, and many prominent party members were unable to come to terms with heavy industry taking a backseat as other areas of the economy were allowed to develop. This lack of success resulted in Khrushchev losing the faith of the Central Committee as well as the military, his main source of support, and also largely contributed to his loss of power. Khrushchev was a persuasive Leader with a strong personality, but the party did not want such a figure after their last one of those brought his country and his people nothing but harm. Therefore Khrushchev, with his risk-taking and intuitive approach, came to power at the wrong time in the USSR and was not the right man to succeed the despot in 1953. The legacy of Stalinist Russia was just too much for one man to overcome in such a short space to time and it was Khrushchev?s mistake to attempt to so with such haste. With the party, according to McCauley ?yearning for a manager rather than a leader?, the Pravda?s derision of Khrushchev as ?alien to the party? in 1964 was entirely accurate; he was alien to what the party had become under Stalinist rule, and although his ability to be a successful Leader cannot be questioned, he could not be a successful Soviet Leader as the contrast Khrushchev marked from his predecessor, whether good or bad, was too much for the USSR to contemplate. Ciara Lally 22.06.2010 ...read more.