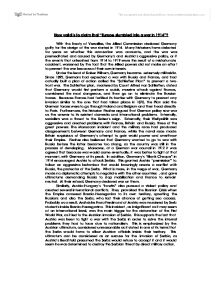 How valid is to claim that &quot;Europe stumbled into a war in 1914&quot;?

How valid is to claim that "Europe stumbled into a war in 1914"? With the Treaty of Versailles, the Allied Commission declared Germany guilty for the design of the war started in 1914. Many historians have debated for years on whether this accusation was accurate, and the war was premeditated and caused by Germany's and Austria's aggressive policy, or if the events that unleashed from 1914 to 1919 were the result of a misfortunate accident, worsened by the fact that the Allied powers did not make an effort to prevent the war because of their own interests. Under the lead of Kaiser Wilhem, Germany became extremely militaristic. Since 1892, Germans had expected a war with Russia and France, and had actually built a plan of action called the "Schlieffen Plan" to prevent a two-front war. The Schlieffen plan, mastered by Count Alfred von Schlieffen, stated that Germany would first perform a quick, massive attack against France, considered the most dangerous, and then go on to eliminate the Russian forces. Because France had fortified its frontier with Germany to prevent any invasion similar to the one that had taken place in 1870, the Plan said the German forces were to go through Holand and Belgium and then head directly to Paris. Furthermore, the historian Fischer argued that German policy saw war as the answer to its existent domestic and international problems. ...read more.

On the other hand, it could be argued that the war was an accident, produced by diplomatic mistakes. From 1871 until 1890, Prussia's Bismarck, after achieving the union of the German states, followed a pacifist policy. His system understood that good relations with the great powers were better for his country's future. He realized he needed to keep Germany "� trois in a Europe of five powers", meaning that by maintaining an alliance with two of the five great powers, he could guarantee German security. This idea was the main constituent of the "Dreikaiserbund", or "League of the Three Emperors" which involved securing a friendship between Germany, Russia and Austria-Hungary for protection against a France who, Bismarck understood, would seek revenge for the incorporation of Alsace and Lloraine to the German territory. Therefore, Bismarck concentrated in isolating France and kept good terms with Britain. By pronouncing the words "My map of Africa lies in Europe" he made clear his lack of ambition to expand German power around the world which he knew was Britain's main concern. Bismarck also signed the Dual Alliance with Austria-Hungary which was then joined by Italy, forming the Triple Alliance. He also managed to sign the Reinsurance Treaty with Russia in 1887, assuring neutrality between them in any war. However, the stability of the Bismarckian system in Germany crumpled when Kaiser Wilhem gained control of the country in 1889. ...read more.

First of all, they kept their Alliances a secret, creating suspicion from the countries who were not involved and who did not know what it meant to their own domestic safety which produced a mass hysteria. As well, Britain did not make clear what her intentions would be if a war were to begin. Germany did not know how far Britain would go and if she would end her "splendid isolation" in order to stop a war and solve European problems. Furthermore, the miscalculation all countries made was the seriousness of this war. They did not realize that the conflict would lead to monstrous repercussions such as the destruction of the basis of the European society. In conclusion, it could be argued that although there was some premeditated action from Germany, Austria-Hungary and also from some of the Allied powers, the war developed or worsened due to diplomatic miscalculations. Germany's aggressive policy is shown to have been a terrible mistake, as although Germany was keen to fight a war to ease domestic problems, it had not planned to fight a world war with massive consequences and destruction. What is more, the atmosphere of mistrust created by the Alliance system was one of the most serious mistakes, as it led to hostility and massive paranoia between the countries. The Great Powers feared they would lose credibility and status if they sought diplomatic compromises, and in the end their fear for war led them straight into one. ?? ?? ?? ?? ...read more.