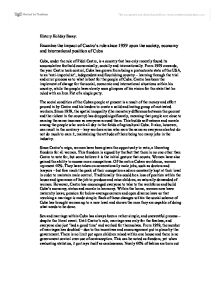 History Holiday Essay: Examine the impact of Castro's rule since 1959 upon the society, economy and international position of Cuba Cuba, under the rule of Fidel Castro, is a country that has only recently found its accumulative foothold economically, socially and internationally. From 1959 onwards, the year Castro took control, Cuba has grown from being a protectorate state of the USA, to an 'anti-imperialist', independent and flourishing country - learning through the trial and error process as to what is best for the people of Cuba. Castro has been the implement of change for the social, economic and international situations within his country, while the people have slowly seen glimpses of his vision for the state that he ruled with an Iron Fist of a single party. The social condition of the Cuban people at present is a result of the money and effort poured in by Castro and his leaders to create a solid and lasting group of motivated workers. Since 1959, the spatial inequality (the monetary difference between the poorest and the richest in the country) has dropped significantly, meaning that people are close to earning the same incomes as everyone around them. ...read more.

Cuba's economic ties with the socialist world reinforce its dependence upon other countries to provide export markets. Arguably, this provides a viable reason for why Castro resorted to the Soviet Union when they had been seemingly neglected, or used, by the U.S. Castro realised that, for his economy to be successful and to guarantee the use of the existing sugar plantations, he needed to befriend another super-power. So as the U.S. pulled away, Castro shuffled Cuba closer to the Soviet Union - creating an example to the people of the government and the steady economy Castro aimed to build. Farms were modelled upon the Soviet Union, and three-quarters of land was confiscated and held by the State. 40% of food was imported into Cuba, as a result of the dominant sugar crop using crop-farming land. However, in 1990, the USSR withdrew support and Cuba experienced a shocking drop in Gross Domestic Product. Cuba's imports fell from $8 billion to $2.2 billion, food was scarce and export market had diminished. Cuba was accused of putting 'to many eggs in one basket'. Since, Cuba has created stronger ties with South American countries, Mexico becoming Cuba's leading foreign investor. ...read more.

Socially, freedom has become an emerging theme among the government's policies and the ease at which a citizen can access help demonstrates the government's efficiency in providing for its people - a major goal of Castro's government reached. The economic revolution, which has taken place through times of doubt and hardship, has been a significant learning for the young government. The economy has been built around sugar production for so long, that finding the alternative in tourism and mining has been a relief for the people, but also encouraged them do what they enjoy as an occupation. Castro's overall morale found within the people places them on a pedestal far above the havoc found in their relations with the U.S. and the USSR. Under Castro, Cuba has grown economically, and can now take its place on the world stage with a new direction, and not feel manipulated by another state. With foreign investment into Cuba becoming easy to access, many countries are finding Cuba to be welcoming trade partner, with impressive history of dealing with the two most extreme governments in the world. Castro's impact upon Cuba has been one of overall positive influence, but has only been achieved through inevitable downfalls in idealist approaches to certain situations. ...read more.