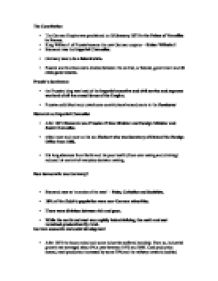 Imperial Germany Revision Notes. Powers and functions were divided between the central, or federal, government and 25 state governments.

The Constitution � The German Empire was proclaimed on 18 January 1871 in the Palace of Versailles in France. � King William I of Prussia became the new German emperor - Kaiser Wilhelm I � Bismarck was the Imperial Chancellor. � Germany was to be a federal state. � Powers and functions were divided between the central, or federal, government and 25 state governments. Prussia's dominance � the Prussian king was head of the imperial executive and civil service and supreme was lord of all the armed forces of the Empire. � Prussia could block any unwelcome constitutional amendments in the Bundesrat Bismarck as Imperial Chancellor � After 1871 Bismarck was Prussian Prime Minister and Foreign Minister and Reich Chancellor. � relied more and more on his son Herbert who was Secretary of State of the Foreign Office from 1886. � His long absences from Berlin and his poor health (from over-eating and drinking) reduced his control of everyday decision making. How democratic was Germany? � Bismarck saw as 'enemies of the state' - Poles, Catholics and Socialists. � 10% of the Reich's population were non-German minorities. � There were divisions between rich and poor. � While the north and west was rapidly industrialising, the south and east remained predominantly rural. German economic and social development � After 1873 the boom ended and some industries suffered hardship. Even so, industrial growth rate averaged about 3% a year between 1873 and 1890. Coal production soared, steel production increased by some 70% and the railway network doubled. � Germany's population grew from 41 million in 1871 to 49 million by 1890. Some areas, like Bavaria, remained in a sort of agrarian time-warp while others, like the Ruhr, experienced rapid industrialisation. The Liberal era (1871-8) � It is customary to divide Bismarck's domestic policies into two quite distinct phases: a Liberal era, pre 1879; and a conservative era thereafter. ...read more.

� Tsar Alexander II in 1876 declared that Russia would fight alone if needs be to protect the Balkan Christians. The Tsar asked for an assurance of German neutrality in the event of an Austro-Russian war, if Austria sided with Turkey. The Balkan Crisis 1875-78 � In January 1877 In April Russia declared war on Turkey. Courageous Turkish defence of the fortress of Plevna deprived Russia of a quick victory.Plevna finally fell in December 1877 ad the Russians were able to resume their advance. In March they imposed the severe San Stefano Treaty on the Turks. This treaty significantly improved Russia's position in the Balkans. � The San Stefano Treaty confirmed Andrassy's worst fears that he had been duped. � Bismarck, somewhat reluctantly, offered his services as the 'honest broker'.. Treaty of San Stefano: European Turkey was to be reduced to small unconnected territories by the creation of a Big Bulgaria under Russian occupation for 2 years. Turkey ceded Kars and Batum on the eastern shore of the Black sea to Russia Serbia, Montenegro and Romania were to be fully independent of Turkey There was no mention of Austria taking Bosnia and Herzegovina The Congress of Berlin: June-July 1878 � The fact that the Congress - the most important meeting of the powers since 1856 - Russia had agreed to reduce the size of Bulgaria Britain had agreed to guarantee Turkey's security in exchange for Cyprus The Sultan has promised to introduce reforms � Treaty of Berlin: Big Bulgaria is divided into three. Macedonia was returned to Turkish rule Russia recovered south Bessarabia from Romania Russia retains Batum Austria occupies Bosnia Herzegovina Britain keeps Cyprus The Congress of Berlin � Disraeli's firm stand had checked Russia and Cyprus was a useful acquisition. � The Pan-Slavist press was bitterly critical and Alexander II described the Congress as 'a coalition of the European powers against Russia under the leadership of Prince Bismarck'. ...read more.

In consequence, Russia simply turned to Paris where French financiers were eager to accommodate them. � Nor did the Reinsurance Treaty necessarily reduce the danger of a clash over the Balkans. � Bismarck used all his influence to encourage Britain, Italy and Austria to sign the Second Mediterranean Agreement (December 1887), again guaranteeing the status quo in the Mediterranean and Near East. � In February 1888 Bismarck published the Dual Alliance, partly to warn Russia that Germany would stand by Austria if it came to war and partly to restrain Austria by making it clear that Germany's obligations were limited to a defensive war. Threats to Bismarck's position � If Wilhelm died, Crown Prince Frederick, a man of liberal views who was married to the eldest daughter of Queen Victoria, would ascend to the throne. It seemed likely that he would dismiss Bismarck and appoint a liberal chancellor. Wilhelm II and Bismarck � Wilhelm died in March 1888. He was succeeded by Frederick. Frederick, however, died from cancer only three months later. Frederick's 29 year old son Wilhelm II then became Emperor. Bismarck and Wilhelm II � They also disagreed over social policy. Unlike Bismarck, Wilhelm was confident that he could win over the working class by a modest extension of the welfare system, including an end to child labour and Sunday working. Bismarck, in contrast, favoured repression. � In 1889 he proposed to make the anti-socialist law permanent. � In February 1890 the election was a disaster for Bismarck. His Conservative and National Liberal allied lost 85 seats while the Radicals gained 46 seats and the Socialists won 24 seats. The opposition was again in control of the Reichstag. � At a stormy interview Bismarck nearly threw an inkpot at the Kaiser and then enraged him by letting him see a letter from Tsar Alexander III very disparaging of Wilhelm's talents. Wilhelm sent Bismarck an ultimatum - resign or be dismissed. ...read more.