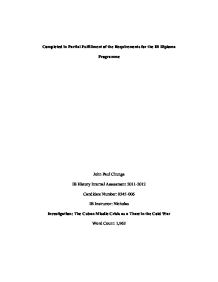 Investigation: The Cuban Missile Crisis as a Thaw in the Cold War

Completed in Partial Fulfillment of the Requirements for the IB Diploma Programme John Paul Chunga IB History Internal Assessment 2011-2012 Candidate Number: 0345-006 IB Instructor: Nicholas Investigation: The Cuban Missile Crisis as a Thaw in the Cold War Word Count: 1,963 Section A I want to know more about politics in the 1960s at the height of the Cold War when John F. Kennedy's New Frontier combats Soviet ambition. The United States and the Soviet Union were the superpowers of the world with two competing ideologies. With this competition came fear of that the other would best them in technological advancement. The nuclear arms race had begun after the Second World War and on October 16, 1962 culminated with the Cuban missile crisis that had the world inches from destruction. After this event the arms race did not flex its power as the Cold War thawed, however what evidence supports this supposed thawing in the Cold War? In other words, to what extent did the Cuban missile crisis lead to a thaw in the Cold War with the Soviet Union? To reach a conclusion for the research question, the conditions leading up to, during, and following the Cuban missile crisis will be assessed. The lessons learned from the administrations following will be used to assess whether a thawing occurred. The sources Thirteen Days by Robert F. Kennedy and The Fog of War directed by Errol Morris is used and analyzed for its origins, purposes, values, and limitations. The cultural aspect of the Cold War is not assessed in the determination of Cold War thawing and is limited to a United States perspective focusing on relations with the Soviet Union. Section B Pre Missile Crisis and Heating * Had FDR not died, the Cold War would not have happened, but it did, and the Americans had the monopoly on the bomb, which made Russia want to catch up to the opposing superpower (Walker 27) ...read more.

But Turkey adjoins us; our sentries patrol back and forth and see each other" (See Appendix 1). His letter accepting Kennedy's peace showed the Soviet Union was bluffing the whole time, and the bluff did not work out. The Soviet's bluff ended Soviet aggression towards the United States since it would not challenge the Americans with the exception of a Middle East conflict. Furthermore, the United States would organize a series of arms settlements that were designed to limit testing of nuclear weapons, however there were inconsistencies with American and Soviet policy. They both built up arms during the Cold War, but they did not test it. The Americans involved themselves in a conflict in Vietnam causing them to have a better relationship with Peking than Moscow. All this in mind, the United States built up arms as a safeguard so other countries would not challenge them. The nuclear weapons had the opportunity to put the world in jeopardy and they had the power to stop it. The United States used their experience in the crisis to put themselves in the others' shoes and realized countries would not challenge a strong arms force. Furthermore, Robert McNamara's experience in dealing with Cold War countries brought the United States to prepare for attack because of the unpredictability of other countries. The Cuban missile crisis shows unpredictability, but due to the United States hardline reaction, they avoided destruction. McNamara's hardline leads to the United States avoiding conflict leading to d�tente, causing the cooling of tensions and absence of Cold War outbreaks. Section E The Cuban Missile Crisis set off the negotiations and talks concerning nuclear weapons. It was the first conflict where the United States and the Soviet Union engaged in a direct struggle, spawning a reaction within the United States and the Soviet Union to not give in to the destruction of nuclear weapons. Khrushchev did not want to give in to "petty passions" that would lead to nuclear war, and therefore getting rid of nuclear weapons would stop tension (Appendix 1). ...read more.

Therefore, any accidental use of them to the detriment of the United States is excluded. These means are situated in Cuba at the request of the Cuban Government and are only for defense purposes. Therefore, if there is no invasion of Cuba, or attack on the Soviet Union or any of our other allies, then of course these means are not and will not be a threat to anyone. For they are not for purposes of attack. If you are agreeable to my proposal, Mr. President, then we would send our representatives to New York, to the United Nations, and would give them comprehensive instructions in order that an agreement may be reached more quickly. If you also select your people and give them the corresponding instructions, then this question can be quickly resolved. Why would I like to do this? Because the whole world is now apprehensive and expects sensible actions of us. The greatest joy for all peoples would be the announcement of our agreement and of the eradication of the controversy that has arisen. I attach great importance to this agreement in so far as it could serve as a good beginning and could in particular make it easier to reach agreement on banning nuclear weapons tests. The question of the tests could be solved in parallel fashion, without connecting one with the other, because these are different issues. However, it is important that agreement be reached on both these issues so as to present humanity with a fine gift, and also to gladden it with the news that agreement has been reached on the cessation of nuclear tests and that consequently the atmosphere will no longer be poisoned. Our position and yours on this issue are very close together. All of this could possibly serve as a good impetus toward the finding of mutually acceptable agreements on other controversial issues on which you and I have been exchanging views. These views have so far not been resolved, but they are awaiting urgent solution, which would clear up the international atmosphere. We are prepared for this. Respectfully yours, N. ...read more.