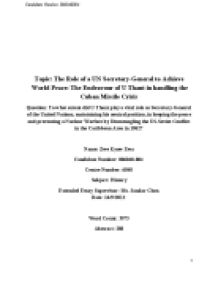 Extended Essay - The Role of a UN-Secretary General to Achieve World Peace: The Endeavor of U Thant in Handling the Cuban Missile Crisis

On 30th October, U Thant?s first meeting in Havana with Castro was a failure. Even though Thant had stressed on the plea for trading the US?s pledge of not invading Cuba for UN?s supervision of dismantling the Cuban missile sites, as agreed by Khrushchev, Castro bluntly rejected this offer. This might be due to Castro?s desire to gain power as a strong military leader of Cuba by possessing these offensive weapons. In addition, he might not believe the US?s promise of not invading Cuba, and so, could not accept U Thant?s proposal. The very same day, U Thant received good news from a Soviet general; that, the Soviet had begun disassembling the missiles in Cuba and would complete the operation by 2nd November.[35] This was encouraging news not only for the national security of the US, but also for the world to avoid a nuclear warfare. On 31st October, despite Thant's second meeting with Castro remaining futile, he still managed to persuade Castro to return the body of the US pilot, Major Rudolph Anderson.[36] Returning to New York, U Thant could conclude that his trip to Cuba had been fairly successful; he had acquired direct information of withdrawal of missiles in Cuba as well as retrieved the US pilot?s body. 1. Resolution From 1st to 20th November, U Thant continued to serve as a mediator to ensure an absolute cessation of the crisis. During this time, he achieved consent from Castro, in agreement from both the US and the USSR, to send the ICRC (International Committee of Red Cross) to verify the uprooting of missiles in Cuba, instead of the UN observers.[37] On 20th November, after the US air surveillance of the withdrawal of Soviet bombers in Cuba, Kennedy lifted the quarantine. The Cuban missile crisis had come to an end. The following results have been obtained from the UN?s intervention in the Cuban missile crisis: * Dismantle of the Soviet nuclear missiles from Cuba * US?s pledge with USSR of not invading Cuba ...read more.