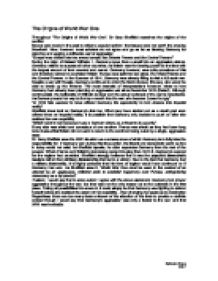 Origins of WWI. Throughout The Origins of World War One, Dr Gary Sheffield examines the origins of the conflict.

The Origins of World War One Throughout "The Origins of World War One", Dr Gary Sheffield examines the origins of the conflict. Moves were made in the past to reflect a popular opinion: that issues were not worth the ensuing bloodbath. Now, however, most scholars do not agree and go as far as blaming Germany for planning and waging a deliberate war of aggression. "Europe was divided into two armed camps: the Entente Powers and the Central Powers" During the reign of Kaisser Wilhelm II, Germany move from a small into an aggressive stance. Germany wished to surpass all other countries, as Britain was the leading power at the time with the largest amount of land covered and owned. ...read more.

"In 1914 fate seemed to have offered Germany the opportunity to turn dreams into imperial reality" Sheffield does look on Germany's side too. What may have started out as a small goal soon offered them an imperial reality, it is possible that Germany only decided to push on after she realized her own capability. "Britain went to war because it saw a German victory as a threat to its security". Every side was afraid and conscious of one another. France was afraid as they had been long term rivals whilst Britain did not want to return to the continent being ruled by a single, aggressive state. ...read more.

If asked, I would say that to some extent I agree with the above statement. Germany had proven aggressive throughout the war, but that was not the only reason as to the outbreak in the first place. Taking all possibilities into account, it could simply be that Germany was fighting to defend herself before she realized the extent of her capability - then changing her goals as to domination. Regardless, there are too many facts unknown of the situation of the time to provide a definite answer though I would say that Germany's aggression was only a factor to the war, and that WWI was inevitable. ?? ?? ?? ?? Katherine Wang H3NT ...read more.