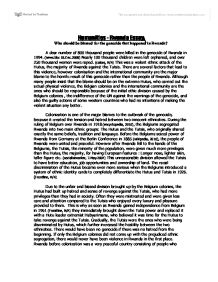 Humanities - Rwanda Essay Who should be blamed for the genocide that happened in Rwanda? A dear number of 800 thousand people were killed in the genocide of Rwanda in 1994. (news.bbc 18.Dec.2008) Nearly 100 thousand children were left orphaned, and over 250 thousand women were raped. (colorq, N/A) This was a violent ethnic attack of the Hutus, the majority of Rwanda against the Tutsis. There are several factors that lead to this violence, however colonisation and the international community are the major blame to the horrific result of this genocide rather than the people of Rwanda. Although many people insist that the blame should be on the extreme Hutus, who carried out the actual physical violence, the Belgian colonies and the international community are the ones who should be responsible because of the initial ethic division caused by the Belgium colonies , the indifference of the UN against the warnings of the genocide, and also the guilty actions of some western countries who had no intentions of making the violent situation any better. Colonization is one of the major blames to the outbreak of the genocide, because it created the tension and hatred between two innocent ethnicities. ...read more.

(socialworker, 7.May.2004) However after the ruling of the Belgiums, Rwanda's future had changed dramatically to a horrific scene of bloodshed and violence. Besides the factor that triggered the genocide to happen, there was the international community who chose to ignore and worsen the situation. Three months before the genocide in 1994, the UN were given warnings that violence would take place in Rwanda. A fax from Dallaire, the man who was assigned by the UN to bring peace, was sent to them, requesting for troops and armed men to prevent any violent situations, however the UN refused with an excuse that it may have been a false alarm. (thirdworldtraveler, 2002) Moreover, the UN did not officially refer the violence happening in Rwanda as a genocide until 300 thousand people were killed, because they were obliged to interfere with any genocide that was happening around the world.(wcl.american, N/A) However, ever since the failure they suffered from the Somalian Incident, the UN no longer had the courage to interfere. Once the genocide broke out, the UN removed its peace keeping forces and only 450 soldiers remained in the country. This was a selfish act, because even a few thousand troops and men could have helped stopped 800 thousand lives being lost in the violence, but the UN chose to ignore the situation. ...read more.

Also, before the genocide, the Hutu extremists spread racist ideas against Tutsis through radio and hate propaganda, encouraging more and more people to join the violence. (wcl.american, N/A) Nevertheless, it is not the fault of innocent Rwandan people who were only angered and encouraged to bring up violence against their own race. It is the blame of the colonies who created the initial hatred and also the external countries who chose not only to ignore, but also to join and support the violence. The horrifying massacre was put to an end by the leader of the RPF - Paul Kagame who overthrew the Hutu regime, and who is now also Rwanda's president. However, even though thousands of people found guilty during the genocide were put to trial and jail, (trincoll, N/A) the ghosts of the victims continue to seek revenge and justice for their tragic death. Even today, Kagame is faced with severe economic, social and political problems caused by the genocide and is pressured to solve all these difficulties. However no matter how Kagame, or the UN tries to solve the aftermath problems, the blame of this dreadful genocide should go to the Belgian Colonies, the UN as well as some western countries, because there were the ones who initially brought up the racial discrimination, who chose to ignore the situation and also who supported the brutal violence. ...read more.