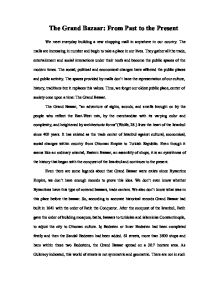 The Grand Bazaar: From Past to the Present We meet everyday building a new shopping mall in anywhere in our country. The malls are increasing in number and begin to take a place in our lives. They gather all the trade, entertainment and social interactions under their roofs and become the public spaces of the modern times. The social, political and economical changes have affected the public places and public activity. The spaces provided by malls don't have the representation of our culture, history, traditions but it replaces this values. Thus, we forget our oldest public place, center of society once upon a time: The Grand Bazaar. The Grand Bazaar, "an adventure of sights, sounds, and smells brought on by the people who reflect the East-West mix, by the merchandise with its varying color and complexity, and heightened by architectonic forms"(Wolfe, 28.) lives the heart of the Istanbul since 400 years. It has existed as the trade center of Istanbul against cultural, economical, social changes within country from Ottoman Empire to Turkish Republic. Even though it seems like an ordinary oriental, Eastern Bazaar, an assembly of shops, it is an eyewitness of the history that began with the conquest of the Istanbul and continues to the present. ...read more.

Although these people had different cultures, traditions and belief, as a merchant or as a customer, they have a midpoint that is Grand Bazaar. Banding together the people from empire, the bazaar teaches them its own traditions and beliefs. The competition was forbidden in the bazaar. The prices were same in every shop and determined with the consensus of the artisans. The story of "the first sale of the day" was most famous example of bazaar's trade tradition. If the neighbor did not make the first sale of the day, leading the customer to your neighbor was a custom. Even though there was not a security system in bazaar, there didn't happened any theft, fight or argument. There was a peaceful ambiance within the merchants and customer. The bazaar had opened with the sunrise and closed with sundown (Tin�, 2.) The bazaar was also closed Friday at prayer times and noontime of the days. Even the nonmuslim hosts of the bazaar did not attend to prayer; they did close their shops at that time. Besides these unwritten, soft laws, government also governed the bazaar. The handicraftsmen were governed by craft guild to which they were belonging. ...read more.

The Grand Bazaar is the public place of the Istanbul and even all the country since 400 years. It existed with the conquest of the Istanbul and witnessed all the changes that occurred in the city, in the country. At one time the bazaar gathered all the traders and trade goods of the empire, it hosted all the production of empire under its dome, and it reflects all the beauty of our culture in that hand made production. The bazaar had own whatever we own and represented our country to us, to journeyers. The bazaar represents our visual richness as all our historical places do. The Grand Bazaar is even not only a heritage to us; it is a heritage to the entire world, because it ages gracefully as the oldest shopping and trade center of the world. So, the bazaar cannot be compare with the modern malls which are similar to each other and don't have a meaning for cultural values, identity of social identity. Even they displace trade activity in the country; they can't replace the value of bazaar within the hearts. "The bazaar expresses the Istanbul. It may be told about the Beauty of the Istanbul that it is a treasury, a wedding chest or a bureau of a bride" (Gulersoy, 4. ...read more.