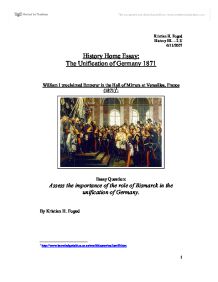 Kristian H. Foged History HL - 2.U 6/11/2007 History Home Essay: The Unification of Germany 1871 William I proclaimed Emperor in the Hall of Mirrors at Versailles, France (1871)1: Essay Question: Assess the importance of the role of Bismarck in the unification of Germany. By Kristian H. Foged In his memoirs, Otto von Bismarck depicted himself as the great master-planner behind the unification of Germany. There is no doubt as to whether Bismarck played a key role in the German Unification; however there were factors that were essential to bringing about Bismarck's dream of a unified Germany. It is important to remember all the factors that helped Bismarck; Prussia's military and economic strength, the Zollverein, German nationalism, the political situations distribution of power at the time, the influences of other strong leaders such as General Albrecht von Roon and General Helmuth Moltke. In this essay we will try to assess how significant a part Hr. Otto von Bismarck really played in the Unification of Germany in 1871. Before Bismarck took the seat of Prussia's Chief Minister in 1862, the first basis for German unification under Prussian rule had already been set in place; the free trade union known as the Zollverein. ...read more.

After Denmark rejected their ultimatum to drop claims to the two duchies, Germany and Austria went to war against Denmark together in January 1864, with very different motives. Austria supported the Augustenburg claim to the throne, as did Prussia at first. However, it later called for the annexation of the duchies rather than a new monarch. After Denmark surrendered in July and gave up their claims to the two duchies, the decision of who was to rule these two duchies became a political battle between Austria and Prussia. In the end it was decided that Holstein would be administered by Austria and Schleswig by Prussia. This left Bismarck with the option of being able to pick a quarrel with Austria over Holstein when he felt the time was right. In 1865-66 Austria wanted war with Prussia. This was to be the long awaited conflict between the two sovereign German states, but even though Austria still had the bigger army, Bismarck had politically prepared for the conflict; by 1866 Bismarck had succeeded in securing French neutrality in the case of war with Austria, as well as creating a secret alliance between Italy and Prussia should the conflict rise. This war was crucial in deciding which of the two nations would gain supremacy over the German states, therefore Bismarck's goal of a united Germany under Prussian rule now depended on the strength of the Prussian army. ...read more.

"It is not through speeches and majority decisions that the great questions of the day are decided...It is by iron and blood,"2 was how Bismarck strongly Bismarck felt towards increasing the strength of a nation. It is quite possible that when Bismarck looked at Germany he saw simply the best opportunity to create a powerful nation of military importance and therefore he spent the years leading up till 1871 trying to create a unified Germany under Prussian leadership. Bismarck did not lay down the groundwork and ideas for a unified Germany, but what he did do was make one possible. Military reforms that allowed successful wars, speeches made to rattle the feeling of nationalism inside the German people and the final victory over Austria as the head of the German states; all these factors that led to a German Unification under Prussia in 1871 were orchestrated by a Prussian Chief Minister and a German Chancellor named Otto von Bismarck. If any the factors helping Bismarck unify Germany had not been there, it may not have been possible to have done it in 1871, but Bismarck's significance lies in the manner in which he led all these factors together, whether as a master-planner or a master-opportunist, Bismarck managed to lead Prussia into becoming the German Empire of 1871. ...read more.