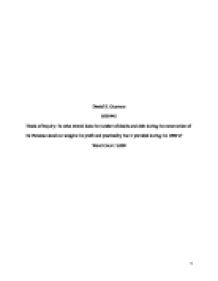 To what extend does the number of deaths and debt during the construction of the Panama Canal out weights the profit and practicality that it provided during the 1900s?

Daniel E. Guerrero 8595445 Thesis of Inquiry: To what extend does the number of deaths and debt during the construction of the Panama Canal out weights the profit and practicality that it provided during the 1900's? Word Count: 2,000 Section A In order to be able to analyze the full damage the United States (US) rash decision had on the Canal Zone, the scope of this historical investigation will involve the Unites States involvement with Panama. In order to comprehend the type of decision the government did, this investigation will also look at the lengths that the US went in order to acquire the Canal Zone. Lastly, this investigation will also cover the complications that came with building the canal in Panama in the 1900's and how this complications could potentially outweigh the benefits that came with the Panama Canal. The two sources selected to analyze origins, purpose, values and impacts are: The Real Conditions at Panama by Eugene Lyle (1905) and Theodore Rex by Edmund Morris (2011) Section B The United States (U.S) became greatly interested in building a canal after the USS Maine was destroyed while in Cuba in 1898. (Sass, 140) The navy sent the USS Oregon, which was stationed in San Francisco, to replace it. ...read more.

(Sass, 154) However, as soon as John Findley Wallace, the chief engineer of the construction, arrived to the site; he was quoted on a letter reporting to Roosevelt: "The living conditions are nothing as expected.There is little in the way of housing for the workers, no public buildings, few roads and no sewage system." (Morris, 110) The living conditions were horrible, mostly because there was no infrastructure which caused thousands of workers to quit, including Wallace, because he feared for his health.(Morris, 110) In fear that the project might fail, Roosevelt replaces Wallace with John F. Stevens.(Omar,123) Due to the lack of facilities and resources available to the workers, Stevens was forced to stop construction of the canal for a whole year.(Morris, 111) An estimated 1,250 homes were built during this period, along with 1,200 administration and recreational centers.(Murillo, 243) The U.S had to spend over $60,000 dollars to sponsor to construction of communities near the construction site.(Murillo, 244) During this time, there was no progress on the canal either. (Murillo, 244)As a result, it shows that if the U.S hadn't acted so rash in buying the land, they could have save a lot of money and time. But instead, the bill simply pile up, which created made less resources available for the actual construction of the Canal. ...read more.