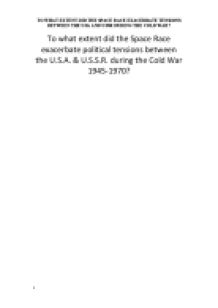 To What Extent Did The Space Race Exacerbate Political Tensions Between The USA and USSR during the Cold War?

﻿TO WHAT EXTENT DID THE SPACE RACE EXACERBATE TENSIONS BETWEEN THE USA AND USSR DURING THE COLD WAR? To what extent did the Space Race exacerbate political tensions between the U.S.A. & U.S.S.R. during the Cold War 1945-1970? ________________ Table of Contents Abstract Main Body/Investigation 4-12 Conclusion 12 Bibliography 13 ________________ Abstract The Cold War is a part of History that has affected the way we perceive a great deal of the world around us. The Cold War was a war like no other, beginning directly after the single most devastating event in the history of the world, The Second World War. The two superpowers, the United States of America and the Union of Soviet Socialist Republics stood as the symbolic representatives of pan-capitalism and pan-socialism respectively, whose ideas were strongly opposed. In this study, I focus on the political tensions between the two opposing powers from the beginning of the Cold War, to the end of the Space Race, and the changing political situations during this time. One source I found particularly useful was from the NASA History investigation into Soviet Space Programs that would challenge the United States? Apollo space program, which offered insightful information about the Soviet regime and the opinions of politicians within the USSR regarding the importance of the Space Race, and attempt to conclude that the propaganda and political and military pressure from each superpower exacerbated the need to reach the moon. My analysis of the sources includes political figures at the heads of each state in other situations that changed the political perspective of the world at the time, such as the Cuban Missile Crisis, and at the same time assess some internal domestic issues faced by each state, such as the R-16 Rocket Disaster which was covered up by the Soviet government until 1990. A great benefit to this study is the fact that now a great deal of information has become declassified allowing for more investigation. ...read more.

The use of reconnaissance planes and the establishment of IRBM facilities in the United Kingdom showed the concern and paranoia of the United States, and the concern regarding the threat of Soviet attack, and the United States? desperation to peek behind the iron curtain to spy on Soviet missile development. The representatives for both factions met at the opening of the American National Exhibition in Moscow, July 24th, 1959, at which Vice President Richard Nixon met with Soviet Premier Nikita Khrushchev to openly debate each nation?s capabilities. The Kitchen Debate was a manifestation of the political tension built up over the past two decades, which led to Khrushchev threatening President Nixon with the Soviet Union?s superior missiles. On August 7th 1959, the Explorer 6 satellite was launched by the USA, sent to take photos of the Earth. The leap forward was enormous, for with the capacity for taking photos of places from space came the capacity to spy on places, and with developing camera technology, soon locations could be monitored from orbit. Soon after, in April of 1960, the establishment of Jupiter IRBMs in Italy began, another NATO ally within striking distance of Moscow, capable of doing considerable damage to the USSR?s fatherland. This constant system of cause and effect between the two superpowers shows the increasing suspicion of the USSR. On May 1st 1960 the USA?s focus on the USSR?s missile capabilities became evident as Francis Gary Powers, a US pilot, was shot down in his U-2 Spy Plane over the Soviet Union, while just under a year later, April 12th 1961, Yuri Gagarin became the first Man in Space, in the rocket Vostok 1. The Vostok Rocket had been praised as a pinnacle in scientific successes and heralded in a new era of space travel ? but the rocket was placed on a pedestal still dusted with the ashes of failure. On October 24, 1960, a rocket designed by Chief Designer Mikhail Yangel was due to be tested. ...read more.

Conclusion The Space Race did exacerbate tensions between the USA and USSR during the Cold War, as the propaganda and media allowed the Space Race to be portrayed as a metaphor for the constant struggle for superiority between the two superpowers. With improved rockets and greater technology for more accurate calculations of trajectory and the like, missiles could be precisely targeted to an ideal location, with trajectories tracked and great distances could be scaled due to the developments made in propulsion systems and the experimentation with mixtures of fuels meant that rockets could travel greater distances with almost no effect in terms of excess weight being carried in the fuel pods, with some fuel compounds reducing the weight of the rocket instead. The Cold War?s effects are still felt today ? the developments made in the race to the Moon has ushered in an era of satellites, space photography and the hunt for life on other worlds. The rivalry of the Cold War is one still closely watched with some anticipation. The Socialist movement has long been depicted as the sworn nemesis of the USA, the symbol of capitalism and self-creation. Personally, I feel that this is a rivalry that would not be laid to rest by a rocket race to Earth?s nearest satellite, and instead would exacerbate it and further develop the issue, as the rockets become more powerful and the nuclear payloads increase.. But on reflection, it is easy to see just how much difference the Space Race made. The pressure of the government elites rested on the shoulders of those responsible for venturing into space and without the work of those great minds the world we live in today might just be a different place, and the Cold War might have ended a far more troubling way than it eventually did, with political tensions spilling over and more encroaching missile emplacements until eventually, the events of the Cuban Missile Crisis would repeat themselves and the standoff would not end so peacefully. ...read more.