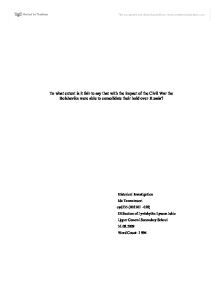 To what extent is it fair to say that with the impact of the Civil War the Bolsheviks were able to consolidate their hold over Russia?

For them, the Civil War was a fight for their lives. The uprisings that increased during the war demonstrate how discontent the people were. Because the Whites had been won in 1920, the government could no longer claim that they were fighting against the counterrevolutionary forces. The peasants understood that it was them who would be destroyed. The broad definition of kulak meant that the government could execute anyone they held dangerous. The peasants, most backward class in Russia, were not interested in politics or who the leader of the country was. What they really wanted was to cultivate their lands and be left alone. For them, it seemed that they were being more suppressed than in the tsarist times. The fact that the government was so isolated from the largest social group that was scattered around the country made it difficult to lead effectively. Given Russia's great size, taking over with military control is understandably difficult and time-consuming. Furthermore, the Red Army was made up of peasants and workers, who had to fight against their own kind. Obviously, this made them very untrustworthy fighters. People were not happy with being forced to join the Red Army, since most of them shared no common ideology with the Bolsheviks. Even the greatest supporters of the Bolsheviks, the sailors, turned against them. The contribution of national minorities that seeked independence made the already weakening government control even weaker. The fact that the attempts on Lenin's life had been so easy to commit showed how weak this control was - he was a leader of a dictate after all, but the subjects had no respect for him, and he could even be killed. The War Communism helped the Bolsheviks to survive through the Civil War, but at the same time it ruined the economy and caused revolts that threated to overthrow them. It seems quite clear that it would have been impossible for the Bolsheviks to stay in power if they had continued this policy. ...read more.