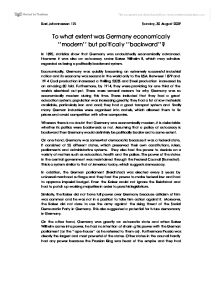 To what extent was Germany economically ''modern'' but politically ''backward''?

To what extent was Germany economically ''modern'' but politically ''backward''? In 1890, statistics show that Germany was undoubtedly economically advanced. However it was also an autocracy under Kaiser Wilhelm II, which may scholars regarded as being a politically backward system. Economically, Germany was quickly becoming an extremely successful industrial nation and its economy was second in the world only to the USA. Between 1879 and 1914 Coal production increased a thrilling 200% and Steel production increased by an amazing 80 fold. Furthermore, by 1914, they were providing for one third of the worlds electrical out-put. There were several reasons for why Germany was so economically modern during this time. ...read more.

The power of the states in the central government was maintained through the Federal Council (Bunestrat). This is a system similar to that of America today, which suggests democracy. In addition, the German parliament (Reichstad) was elected every 5 years by universal manhood suffrage and they had the power to make federal law and had to approve imperial budget. Even the Kaiser could not ignore the Reichstad and had to patch up working majorities in order to pass his legislations. Similarly, the Kaiser did not have full power over Germany because criticism of him was common and he was not in a position to take firm action against it. ...read more.

Even the army took an oath of personal loyalty to the Kaiser rather than to the state, which greatly enforced the authoritarian power he had over Germany. In conclusion, I do agree that Germany was economically ''modern'' because all statistics I have seen confirm this. However, I believe that Germany's political system was greatly backward but not completely because Kaiser Wilhelm did have almost authoritarian control over Germany. However people did criticise him and he could not completely ignore the Reichstad nor the SPD, which challenges how autocratic Germany actually was. Finally, the very definition of ''backward'' is also debatable. I do not believe it is fair to say that autocracy is a backward system and democracy is the right approach because both of these have its flaws. ?? ?? ?? ?? Kari Johannessen 12L Sunday, 30 August 2009 ...read more.