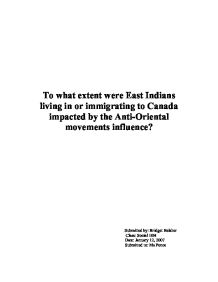 To what extent were East Indians living in or immigrating to Canada impacted by the Anti-Oriental movements influence?

The value of this book is that it talks about the Sikhs, Japanese and Chinese and what they had to go through because of their ethnic origin, religion etc. The east Indians were like the Chinese and the Japanese were protested against, and those who protested against them to prevent from having East Indians immigrant thought they were doing it out of kindness. This book was excellent as a reference due to the well organized content throughout the book The Voyage of the Komagata Maru: the Sikh Challenge to Canada's Colour Bar, written by Hugh Johnston published in 1989. The purpose of this book is that the author is taking many small stories that are related and connecting them into one large story. The value of this book is evident as this event which east Indians challenged white supremacy for the first time was documented. You look at its limitation; a limitation of this book is that if you just wanted the basic facts, this would not be a good source. However, this book would be recommended if you wanted depth knowledge about the Komagata Maru then this book would be a good source. D. Analysis The origins of the racial attitudes that resulted in the passing of the continuous passage law are long and twisted. Before 1800, people of oriental origin were respected, to a point, because their countries had made major contributions to the evolution of technology. ...read more.