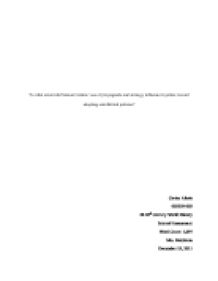 To what extent did Samuel Adams use of propaganda and strategy influence loyalists toward adopting anti-British policies?

the Constitution was good, which makes his point of view concerning the necessity of Adams' ideas vague and the validity of his report difficult to assess. Samuel Adams's Revolution, 1765-1776; with the assistance of George Washington, Thomas Jefferson, Benjamin Franklin, John Adams, George III, and the people of Boston is Cass Canfield's historical account of the events surrounding the American War for Independence with a focus on Samuel Adams' activity and was published in 1976. This book's purpose was to trace the extensive influence of Adams as a leader throughout this ten year period. This source is valuable because it makes note of Adams' use of words and the words of other colonists about Adams, which together, serve as a basis to determine the extent to which he was able to influence others. Though, this source is limited because it focuses heavily upon establishing the social and political effects of Adams' role in society with little references to the causes of said effects, such as his published works in newspapers. Therefore, this resource illustrates the final result of Adam's influence while barely noting the process by which this result was obtained; thus making it difficult to assess which significant events, if any, during this time period were influenced by Adams. D. Analysis Samuel Adams' role as a public figure and a popular writer had a significant influence in convincing colonists to adopt Anti-British policies. ...read more.

Thus, Adams singlehandedly kept this social unrest alive. In addition to this, Adams kept correspondence with men such as James Warren and Richard Henry Lee who both were directly involved in the First Continental Congress (Lee, democraticthinker.wordpress.com). By doing this, Adams was able to affect one of the most important legislative bodies during this time period without leaving Boston. Through correspondence, Adams was able to propose ideas to Lee and Warren, who in turn, proposed them to the entire legislative body. Samuel Adams was indirectly influencing representatives from across the colonies toward anti-British policies, the most noteworthy of which, was the Declaration of Independence (Alexander 154). Therefore, it is evident that Samuel Adams' use of propaganda and strategy had a significant upon the adoption of anti-British policies. E. Conclusion From an early age, Samuel Adams effectively ensured that he was a public figure that the people would both relate to and look up to. By remaining in the forefront of local politics while utilizing the press to spread his ideologies, Adams enabled his ideas to reach the common man, and thus, these ideas such as the boycott of British goods and the formation of a Stamp Act Congress became widely accepted. Also, the writings of Adams influenced other figures who in turn, proposed revolutionary tactics at crucial meetings such as the proposal of the Declaration of Independence by Richard Henry Lee during the Second Continental Congress. Therefore, it is evident that Samuel Adams's use of propaganda had a significant influence upon the adoption of anti-British policies. F. ...read more.