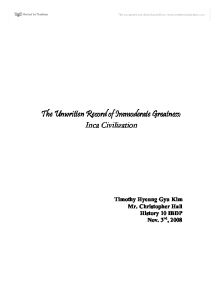 The Unwritten Record of Immoderate Greatness: Inca Civilization Timothy Hyeung Gyu Kim Mr. Christopher Hall History 10 IBDP Nov. 3rd, 2008 "The world is a complex and subtle place. There are millions of connections between every part."1 The history of the world is indeed one of the most complex areas in which thousands of historians try to uncover the mysteries of the past. Out of all the interconnected kingdoms, empires and civilizations that have built the modern society, if even one hadn't existed, our current world could be at a completely different stage of development. This is the case for most parts of our history such as the Romans, Egyptians and Mesopotamians but most of all, the Inca Civilization and its developed society are one of the most vexed anthropological wonders of the entire history.2 It is mainly because the empire had overcome myriads of complex problems and had become one of the most amazing societies the world has ever seen. Inca Civilization was the civilization that had never developed any form of writing but managed to keep its dominance over an enormous area,3 the civilization that had accomplished skull surgeries and other amazing scientific advancements way before modern science was developed,4 and the civilization that was capable of developing irrigation and permaculture on their own at an extreme altitude of approximately 4000m above sea level.5 This proves to us of the greatness of the Incans and even ...read more.

The accomplishments of the Inca Civilization were clearly superior to the two Mesoamerican cultures in many different aspects such as their conquered land and their far-stretched history to the beginning of human existence but the Incas also excelled in architectural skills and technologies to build great and marvelous buildings. Arguably, a lot of the structures that the Incans built were definitely superior to even the pyramids of the Mayans and the temples of the Aztecs. It is still a mystery for today's historians as to the exact method that the Incans used to build the structures that they built. A common example of the masterpiece of Inca's architectural accomplishment would be the famous representation of the Inca culture: Machu Picchu. From the common buildings that were built at countryside to the most marvelous structures such as the terraced city of Machu Picchu or the Huallamarca Pyramid, most of the architectural structures built by the Incans were made of gigantic boulders fitted together so perfectly that not even a knife edge could fit through.19 How were the ancient buildings, on top of steep mountainside, built with the rocks and boulders that can only be found at the very bottom of a valley? Just by human labour, it would need hundreds of people to move the rock from the bottom to the top and it would face many obstacles such as streams and steep hills. ...read more.