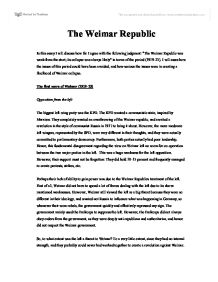 The Weimar Republic In this essay I will discuss how far I agree with the following judgment: "The Weimar Republic was weak from the start; its collapse was always likely" in terms of the period (1919-23). I will asses how the issues of this period could have been avoided, and how serious the issues were in creating a likelihood of Weimar collapse. The first years of Weimar (1919-23) Opposition from the left The biggest left-wing party was the KPD. The KPD wanted a communistic state, inspired by Marxism. They completely wanted an overthrowing of the Weimar republic, and awaited a revolution in the style of communist Russia in 1917 to bring it about. However, the more moderate left wingers, represented by the SPD, were very different in their thoughts, and they were actually committed to parliamentary democracy. Furthermore, both parties actually had poor leadership. Hence, this fundamental disagreement regarding the view on Weimar left no room for co-operation between the two major parties in the left. This was a huge weakness for the left opposition. However, their support must not be forgotten: They did hold 10-15 percent and frequently managed to create protests, strikes, etc. Perhaps their lack of ability to gain power was due to the Weimar Republics treatment of the left. ...read more.

However in the end there ere insufficient support from the Bavarian police. Hitler was arrested. What was Weimar's biggest weaknesses in dealing with the oppositions from the other parties? They views the left as too big of a threat, because he left was so good at giving the illusion of being a more powerful threat. So what we can see from the dealings with the opposition is that there were both flaws within the military itself, but more importantly from the leading persons in the military and national sntuatuin, which can bee seen. In some ways, the Munich Beer Hall putch was a strength to the Weimar Republic: the army had for once withstood orders in did not sympathize with the military leader and the Nazis. On the other hand, Weimar did not entirely manage to take control over the situation . Hitler was released after less than 10 months, and Ludendorff had not even been caught. (page 50) Also the Weimar failed in seeing how big of a insinuation the right wing was, which the putches of both Kapp and Hitler was a warning of. On the other hand, if Weimar had instead changed the leaders of the national insutaint and army, and arrested Hitler and Ludendorff maybe the right wing's future plans would have been much harder to carry out. ...read more.

Stresemann's initiatives were probably a leading factor in the Weimar survival of these economic challenges. Another factor was that the population still had some faith in their government. Popular anger was more directed towards the French and the allies who had occupied the country. Also, some businessmen became more reluctant to Weimar since they did well from the inflation. Nevertheless, the left and right was both weak and dealt with so effectively that there were little support to the extremities. Also the fact that many other European countries were suffering under bad leadership helped (for instance, Italy) Hence, people so no other alternative to the government. So all in all, at this stage of the Weimar time, there was a bigger acceptance of Weimar government. However, the government did not pay all too much attention to the Great Inflation - bigger initiatives could have been taken to secure the long-term consequences of the economic issue - Such as ensuring the growth of investment. This showed that the government did not get into the roots of the economic problems, thought dealt with. However, up until 1923, at least, Weimar had proven that it could in fact withstand some opposition (i.e. the extremist parties). But was the avoidance of understanding the seriousness of the economic problems going to haunt Germany in the following years to come? ...read more.