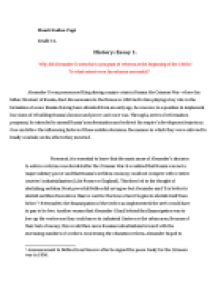 Why did Alexander II introduce a program of reforms at the beginning of the 1860s? To what extent were his reforms successful?

ï»¿Shanti Naidoo-Pagé Grade 11. History: Essay 1. Why did Alexander II introduce a program of reforms at the beginning of the 1860s? To what extent were his reforms successful? Alexander II was pronounced King during a major crisis in Russia: the Crimean War -where his father, Nicolas I of Russia, died. His ascension to the throne in 1855 led to him playing a key role in the formation of a new Russia. Having been educated from an early age, he was now in a position to implement his vision of rebuilding Russia’s honour and power as it once was. Through a series of reformation programs, he intended to amend Russia’s modernisation and redirect his empire’s development trajectory. One can follow the influencing factors of these sudden decisions, the manner in which they were enforced to finally conclude on the effects they incurred. Foremost, it is essential to know that the main cause of Alexander’s decision to enforce reforms was decided after the Crimean War. He realized that Russia was not a major military power and that Russia’s serfdom economy could not compete with western coutries’ industrialization (Like France or England). ...read more.

They also divided the land accordingly to the ones in greatest need. The Zemstvos were also emplaced; they were local councils with power to provide schools, medical service and routes to the main cities. These members were first elected in 1864 and only the wealthy could elect them. On another side, education was becoming more present in lives of local peasants. Indeed, schools were now available for everyone. Illiteracy decreased and more people (especially nobles that sold their lands to move to the city to work) studied in superior schooling. Colleges and Universities sprang up and Alexander encouraged them to read texts from all over the world (i.e. Marx, Tolstoy?), thus creating this new generation newly aware of what was happening in the world. In link with education were the military reforms that were emplaced. They arose from the building developments of technology, the emancipation of the serfs and the quality of education of soldiers. Indeed, Russian armies reduced in size, going from more than a million and three hundred thousand men to under seven hundred and fifty thousand men. During 1862 to 1864, fifteen military education districts were spread out. ...read more.

Alexander?s goal to get back the honour and respect of Russia succeeded but not like he wanted, not with imperialism, not with him on top of everyone. The visionary Alexander II was confronted with a decaying Russian social fabric, and stagnation of the economy when he acceded to the throne. The fatal commitment of a leader, blinded by prideful ambition for an ideal; a Russia honoured and inevitably awed upon. Industrialism, commerce, great military power and overall recognition around the world were the markings of his leadership. But other unexpected consequences happened. Reforms stimulated liberal reformers with a thirst for political change. Alexander desired knowledge for his people at their own expense, and in this displayed the characteristic moral flaw of such types. Flaw in the approach of nation building, which led Alexander II to the logical path of modernization, yet implemented in a way which could only have unstable and unequal outcomes. Was this reckless planning or a necessary phase in Russia?s history? In any case, the repercussions were felt through the Russian revolution and certainly are directly linked with the following Global conflict ? links which one could expose. ________________ [1] Announcement to Nobles from Moscow after he signed the peace treaty for the Crimean war in 1856. ...read more.