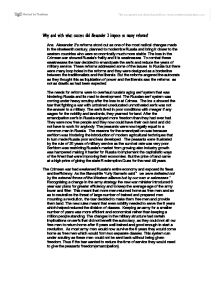 Why and with what success did Alexander 2 impose so many reforms?

Why and with what success did Alexander 2 impose so many reforms? Ans. Alexander 2's reforms stood out as one of the most radical changes made in the nineteenth century, planned to modernize Russia and bring it closer to the western countries who were economically much more stable. The loss in the Crimean war showed Russia's frailty and it is weaknesses. To combat these weaknesses the tsar decided to emancipate the serfs and reduce the years of military service. These reforms addressed some of the issues in Russia but there were many loop holes in the reforms and they were designed as a borderline between the traditionalists and the liberals. But the reforms angered the autocrats as they thought this as liquidation of power and the liberals saw the reforms as not as drastic as had been expected. The needs for reforms were to overhaul russia's aging serf system that was hindering Russia and its road to development. The Russian serf system was coming under heavy scrutiny after the loss to at Crimea. The loss showed the tsar that fighting a war with untrained uneducated unmotivated serfs was not the answer to a military. The serfs lived in poor conditions with meager if any wages for the nobility and landlords, they yearned for land. After the emancipation serfs in Russia enjoyed more freedom than they had ever had. They were now free people and they now could have their own land and did not have to work for anybody. ...read more.

The local zemstvos made Russia a better-governed body and medical care and many more benefits were provided. Even railways tracks were built all over the country to make Russia better connected and easier to travel through. Some forms of industrialization was done which all helped contribute to Russia's growth. The reforms were not as successful as the tsar had expected them to be due to many shortcomings. The Zemstvos were mainly the nobility who saw this as another way of making money and did not really know about the plight of the common peasants. Most of these nobles were made Zemstvos on account of their fortune and the richer they were the more chance they had of becoming a Zemstvo. The land was first given to the Mir who divided the land into portions depending on size of family. The peasants did not like having to take land from Mirs and were given small strips of land which was redistributed almost each year. Due to a hole in the reforms the size of land given was according to the size of the family. This led to population growth as peasants produced more babies to get bigger land. As the land was redistributed peasants did nothing to keep the land fertile but instead used it carelessly as they did not own the land for very long and did not use the land very wisely. ...read more.

Having given hope for radical changes and then halting them made the people angry and raised the chances of a revolt. Thus he was not able to stop the movement started by him. The domestic reforms also failed in another form. These reforms improved foreign problems such as the army they failed to solve the internal problems that had been Alexander's goal. The emancipation did not bring many significant changes in the lives of the peasants as they still lived in bad conditions and in some places it took them about 20 years to get the land promised to them. This failure domestically meant that the peasants were still poor whereas the nobility still had the most and the best land. Corruption also increased after the reforms as Mirs and Zemstvos started to make a lot of money by unconventional methods. Many historians argued that the tsar made many of the reforms not to improve Russia but to improve and strengthen Tsardom. As he did not do much for helping Russia into industrialization and firmly disagreed to forming a Duma as he saw it as a liquidation of his own power that had been given to him by "GOD". He believed that by strengthening Russia he was strengthening Tsardom and its very core. The reforms certainly helped make the peasants equal to the rest of Russians and also changed Russia's military policy, which would benefit later. These reforms did not meet with the success that the tsar had hoped for, but if anything made matters worse for Alexander 2 and in the end resulted in his assassination. ...read more.