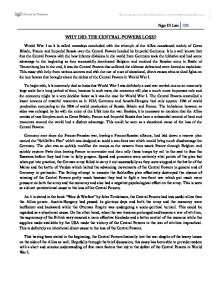 WHY DID THE CENTRAL POWERS LOSE? World War I as it is called nowadays concluded with the triumph of the Allies constituted mainly of Great Britain, France and Imperial Russia over the Central Powers headed by Imperial Germany. It is a well known fact that the Central Powers with the best infantry divisions in the world from Germany took the initiative and had some advantage in the beginning as they successfully dominated Belgium and crushed the Russian army in Battle of Tannenburg but in the end, it was the Central Powers that suffered the ultimate defeat and were forced to capitulate. This essay with help from various sources and with the use of a set of situational, direct causes aims at shed lights on the key factors that brought about the defeat of the Central Powers in World War I. To begin with, it is extremely vital to insist that World War I was definitely a total war carried out on ...read more.

Germany ever since the Franco-Prussian war, fearing a Franco-Russian alliance, had laid down a reserve plan named the "Schlieffen Plan" which was designed to avoid a two-front war which would bring much disadvantage for Germany. The plan was to quickly mobilize the troops to the western front attack France through Belgium and quickly capture Paris thus forcing France to surrender and then rally those troops by rail to the east to face the Russians before they had time to fully prepare. Speed and precision were certainly vital points of the plan but when put into practice, the German army failed to carry it out successfully as they were stopped at the battle of the Marne and the battle of Verdun which halted the advancing movements of the Central Powers in general and of Germany in particular. The failing attempt to execute the Schlieffen plan effectively destroyed the chance of winning of the Central Powers pretty much because they had to fight a ...read more.