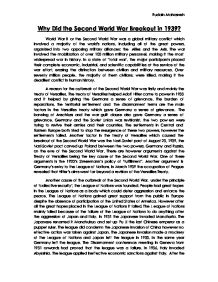 Why did the second World War Breakout in 1939

Why Did the Second World War Breakout in 1939? World War II or the Second World War was a global military conflict which involved a majority of the world's nations, including all of the great powers, organized into two opposing military alliances: the Allies and the Axis. The war involved the mobilization of over 100 million military personnel, making it the most widespread war in history. In a state of "total war", the major participants placed their complete economic, industrial, and scientific capabilities at the service of the war effort, erasing the distinction between civilian and military resources. Over seventy million people, the majority of them civilians, were killed, making it the deadliest conflict in human history. A reason for the outbreak of the Second World War was firstly and mainly the treaty of Versailles. The treaty of Versailles helped Adolf Hitler come to power in 1933 and it helped by giving the Germans a sense of grievance. The burden of reparations, the territorial settlement and the disarmament terms are the main factors in the Versailles treaty which gave Germany a sense of grievance. The banning of Anschluss and the war guilt clause also gave Germany a sense of grievance. Germany and the Soviet Union was revisionist, the two powers were trying to revive their armies and their countries. ...read more.

So the Great Powers were not really afraid from the League of Nations if a war had emerged. A cause which leads to the breakout of the Second World War was the Wall Street crash in 1929. Firstly the United States was so committed to dealing with the effects of the crisis that it limited America's involvement in world affairs. The economic crisis created insecurity and tensions which endangered the peace in various countries. Due to the crisis the authority of civilian members weakened, the influence of military figures over emperors and cabinet grew. This strengthened the hand of the military men who called for the war of aggression against China and South East Asia in order to seize raw materials and markets which Japan lacked. The financial crisis played an important part in Hitler's rise to power. However it also made the period of the economic crisis a period where it was hard to keep control of the peace. During the crisis many countries cut back their military spending. However countries such as Germany, Italy and Japan saw that military spending and foreign conquests and aggression as solutions to their economic and social problems. So in conclusion the economic crisis made it generally hard to keep the peace in the 1930's. ...read more.