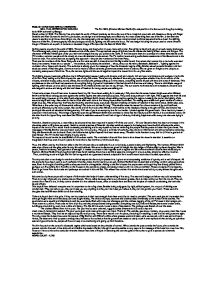 ENGLISH CHRISTMAS BREAK HOMEWORK 1984- FILM APPRECIATION 3/01/2009 The film 1984, (Director-Michael Radford) is adapted from the famous and thought provoking, book 1984 authored by George Orwell, written in 1949. The Director has picturised the world of Orwell precisely as the author would have imagined, traumatic and disastrous. Along with Roger Deakins and Allan Cameron's the film's, production, set design and cinematography are effectively the most outstanding features of the film. It demands the viewer's attention at all times. According to me, the cinematography and set design are the two most important technical aspects that have been the defining features of this film. Cinematography includes; background sound, lighting and the camera's focus. The set design including the props used to create Orwell's image of Oceania are superb. It recreates a devasted image of Europe after the Second World War. Nothing seems to work in the world of 1984. There is decay and deprivation in every nook and corner. Everything is bland and ugly in an awful stony block style. The cinematography clearly portrays a disastrous look of the place. The appropriate usage of light and sound creates the feeling of fear, scare and intrigue. The character of Winston Smith gets under your skin and changes the way you perceive the world. In the first scene there is a portrayal of a three-dimensional world (TV monitor, common people and the rulers) ...read more.

I plotted against the government. I have learnt my lesson. I was sick in mind and body.' This brings to light that even though Winston Smith had committed a crime that had nearly cost him his life, it is a creditable action. On the other hand the Upper Party members like O'Brien's residence was well lit and had a tinge of vibrancy indicating happiness while every one else was dying in poverty. 'Attention, Attention everyone, a vast military development has been reported in section 17 of the war zone' , ' All over Oceania there has been an increase in the chocolate ration to 25 grams per week', 'death to eternal enemies of Oceania'. Another technical aspect is the background sound which enhances the whole impact of the movie. It is a sound that is constantly proclaiming and is very repetitive, forever reminding the people that they were no better than just slaves. The messages of the Big Brother rules are heard every hour of every day. They are a reminder of authority, they drone on information and announcements constantly. Only the Government can be heard. Even, the fundamental rights of speech had been taken away. 'Freedom is the freedom to say 2+2 is 4, if that is granted all else follows'. The TV monitor kept ringing in every scene. The aspect of sound cannot be established off the written media. ...read more.

The lifts did not work. It was a state of depression. The garbage was littered all over the state. The clothes differed from rich to poor. The poor had to wear unironed, rugged clothes whereas the rich wore crisp and clean ones. A demarcation existed. The poor were given stale meat and sugar as a meal. That's all. The utensils, gas stove, crockery, trays were prison like. It was a mundane lifestyle. They lived as an abject of squalor and poverty. There were rats all over the place, devouring on anything. It was a brutal and gruesome sight. The only props that looked new were the posters of Big Brother and O'Brien's office where glasses werenot broken, wine was served, and it was spic and span. Hence, the sets serve their purpose correctly; they indicate to the audience that the government seeks to utterly crush human spirits and that as long as tyrannies exist and governments lie, people will have to keep on surrendering and giving up their freedoms. The film focused on the cons of a dictatorial regime which was based on the principle of control. 'Who controls the past controls the future, who controls the present controls the past'. It has left such an indelible impression. Earlier I thought it was impossible to truly capture the message of the book into a two hour film, However I have come to the conclusion that the director has done a fine job in extracting the core thoughts of the author to give a spectacular cinematic experience. WORD COUNT - 1,780 ...read more.