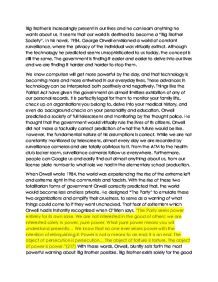 Big Brother is increasingly present in our lives and he can learn anything he wants about us. It seems that our world is destined to become a "Big Brother Society". In his novel, 1984, George Orwell envisioned a world of constant surveillance, where the privacy of the individual was virtually extinct. Although the technology he predicted seems unsophisticated to us today, the concept is still the same. The government is finding it easier and easier to delve into our lives and we are finding it harder and harder to stop them. We know computers will get more powerful by the day, and that technology is becoming more and more entwined in our everyday lives. These advances in technology can be interpreted both positively and negatively. Things like the Patriot Act have given the government an almost limitless exhibition of any of our personal records. It is perfectly legal for them to monitor your family life, check up on organizations you belong to, delve into your medical history, and even do background checks on your personality and education. Orwell predicted a society of full telescreens and monitoring by the thought police. ...read more.

They can probe your innermost thoughts with psychological tests and share information about you with anyone they wish to share it with. The list grows more and more every day. In fact, recent studies suggest that at any given time more two thirds of the nations' private investigators are trying to gather information about the citizens' private lives for the government. This is despite the fact that private institutions are banned from collecting information for the government. As conveyed by Lewis Maltby in his book Workplace Rights: a myth?: "When most Americans go out of their house in the morning, they might as well be going to a foreign country; because they are equally beyond the reach of the constitution in both situations. And unfortunately federal law does very little to fill this void." Orwell even draws close parallels with 1984's thought police and the judicial system of American government today. The thought police can arrest you for thinking of things that could prove to be detrimental to the health of the party. In other words, The Party can convict you of a crime even if no wrongdoing has occurred. ...read more.

Rather than deciding whether or not he likes someone based on their personality, such as if the person makes them laugh, or whether or not they person are kind hearted; man decides whether they hate someone or not based upon a tally of bad qualities and speculations they may have about a person. Orwell predicted just this and exemplifies it in 1984 when Winston describes people of the party. His description of Tom Parsons for example offers little information about the moral fiber of the man but more only about his inadequacies. "He was a fattish but active man of paralyzing stupidity, a mass of imbecile enthusiasms-one of those completely unquestioning, devoted drudges on whom, more even than the thought police, the stability of The Party depended."(22) George Orwell's book 1984 predicted many of the fundamental characteristics of what many people see to be as an impending dystopian society. The author used his own fears to truly create a sense of verisimilitude, which allows for so many analogous parallels to be drawn between the book and contemporary American society. While it provides us with a warning on what things could become, it goes beyond that and provides us with a roadmap that explains the circumstances that would create any of the situations that Orwell sets forth in his literary work of art. ...read more.