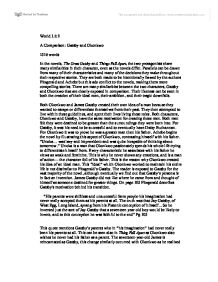 A Comparison: Gatsby and Okonkwo

World Lit 2 A Comparison: Gatsby and Okonkwo 1516 words In the novels, The Great Gatsby and Things Fall Apart, the two protagonists share many similarities in their character, even as the novels differ. Parallels can be drawn from many of their characteristics and many of the decisions they make throughout their respective stories. They are both made to be intentionally flawed by the authors Fitzgerald and Achebe but this ads conflict to the novels, making them more compelling stories. There are many similarities between the two characters, Gatsby and Okonkwo that are clearly exposed in comparison. Their likeness can be seen in both the creation of their ideal men, their ambition, and their tragic downfalls. Both Okonkwo and James Gatsby created their own idea of a man because they wanted to escape or differentiate themselves from their past. They then attempted to live within these guidelines, and spent their lives living these roles. Both characters, Okonkwo and Gatsby, have the same motivation for creating these men. Both men felt they were destined to be greater than the surroundings they were born into. ...read more.

This part of the story explains the toil Okonkwo went through, having to borrow from fellow yam harvesters because he had the setback of being the son of an Agbala. Here, Achebe describes Okonkwo's work ethic "Share cropping was a very slow way of building up a barn of one's own. After all the toil one only got a third of the harvest. But for a young man whose father had no yams, there was no other way." Pg 22. This passage shows the essence of Okonkwo's work ethic as it shows how hard he had to work to achieve his goal. Gatsby was very similar in that he was not born into wealth and fame and therefore had to work at it, which is just like what Okonkwo had to do. Fitzgerald briefly explores Gatsby's journey to wealth and fame, much of Gatsby's work ethic can be seen in this quote as Fitzgerald writes "For over a year he had been beating his way along the south shore of Lake Superior as a clam digger and a salmon fisher or in any other capacity that brought him food and bed. ...read more.

Okonkwo, due to what his self-creation was, acted out by killing a messenger, an action with which his clan did not agree. Achebe sums up what happened to Okonkwo in the quote "Okonkwo stood looking at the dead man. He knew Umuofia would not go to war." Pg. 205 These two sentences occur just after Okonkwo kills the white man's messenger. At this point Okonkwo realized what would happen to him, so he ended up taking his own life. Both Gatsby and Okonkwo's false perceptions, perhaps their greatest flaws, were what lead them to their deaths. In conclusion, both authors use these two characters as examples of what not to do to lead a fulfilling life. Beyond both characters' successes, they did not really enjoy life, as both of their lives were a struggle to achieve their goals. Once these goals were achieved, they both fell from grace in a tragic manner. The main reason their lives were so sad was that they were playing roles they cast themselves in for their entire lives. Playing a role for several decades would make even the strongest miserable. What seems to be the point of both authors portrayed by these characters is that one must choose self-knowledge over self-absorption, to be yourself and not something else. ...read more.