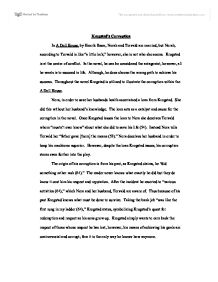 Krogstad's Corruption In A Doll House, by Henrik Ibsen, Norah and Torvald are married, but Norah, according to Torvald is like "a little lark;" however, she is not who she seems. Krogstad is at the center of conflict. In the novel, he can be considered the antagonist; however, all he wants is to succeed in life. Although, he does choose the wrong path to achieve his success. Throughout the novel Krogstad is utilized to illustrate the corruption within the A Doll House. Nora, in order to save her husbands health ascertained a loan from Krogstad. She did this without her husband's knowledge. The loan acts as a catalyst and cause for the corruption in the novel. Once Krogstad issues the loan to Nora she deceives Torvald whom "mustn't ever know" about what she did to save his life (54). ...read more.

After the incident he resorted to "various activities (64)," which Nora and her husband, Torvald are aware of. Thus because of his past Krogstad knows what must be done to survive. Taking the bank job "was like the first rung in my ladder (64)," Krogstad states, symbolizing Krogstad's quest for redemption and respect as his sons grow up. Krogstad simply wants to earn back the respect of those whose respect he has lost, however, his means of achieving his goals are controversial and corrupt; fore it is the only way he knows how anymore. Once Krogstad learns Nora forged the signature and confesses, saying "I signed papa's signature (66)," he has the bargaining chip he needs in order to control Nora and have her do what he wants. ...read more.

Despite all the bad acts of corruption and despicable methods Krogstad still had a catharsis. Mrs. Linde brings about his peripeteia during their first meeting in many years. During their conversation the reader realizes Krogstad's acts from the past where to help Kristine. Kristine shows Krogstad he can still "take it all back (97)." Kristine acts as the vaccine for the epidemic that is the corruption. Instead of allowing Krogstad to demand his letter back from Torvald he encourages him not to so the truth can be revealed, thus allowing the deception to end and the need for corruption demolished. Without her the corruption of Krogstad would still be wrapped around Nora like a venomous snake, but instead he has an insight and corrects his wrongs, allowing Nora to be truly happy. ...read more.