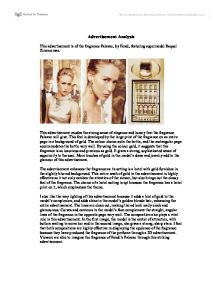 The advertisement enhances the fragrance as its setting is a hotel with gold furnishes in the slightly blurred background. This entire wash of gold in the advertisement is highly effective as it not only catches the attention of the viewer, but also brings out the classy feel of the fragrance. The choice of a hotel suiting is apt because the fragrance has a hotel print on it, which emphasises the theme. ...read more.