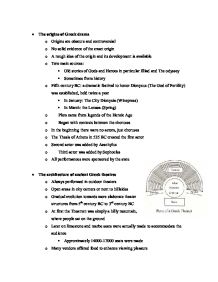 All About Greek Drama

* The origins of Greek drama o Origins are obscure and controversial o No solid evidence of the exact origin o A rough idea of the origin and its development is available o Two main sources: * Old stories of Gods and Heroes in particular Illiad and The odyssey * Sometimes from history o Fifth century BC: a dramatic festival to honor Dionysus (The God of Fertility) was established, held twice a year * In January: The City Dionysia (Winepress) * In March: the Lenaea (Spring) o Plots came from legends of the Heroic Age o Began with contests between the choruses o In the beginning there were no actors, just choruses o The Thesis of Athens in 535 BC created the first actor o Second actor was added by Aeschylus o Third actor was added by Sophocles o All performances were sponsored by the state * The architecture of ancient Greek theatres o Always performed in outdoor theaters o Open areas in city centers or next to hillsides o Gradual evolution towards ...read more.

o Three actors * She same men in the same had to play multiple parts o Masks were used to accentuate characteristics of the actors * In large theaters facial expressions could not have been identified o Fifteen members in the chorus o Dialogue of the actors became increasingly important, as time passed, whereas role of chorus was reduced gradually o Music: Flute, drums and trumpets often used: but these were secondary to dialogues o Scenery, in the form of props were also o A dummy was often used to depict Dionysus using a pulley system o Most comedy was frank, indecent and sexual o performers were coarse and obscene o Used satire to depict important contemporary moral, social and political issues of Athenian life o Cost of attendance was at first free, later on it cost two obels or twenty-five cents * The role of the chorus in Greek drama o Approx. 15 men in the chorus (point strongly contested) ...read more.

* Before Athens's defeat * Hope among the city's citizens either for peace or an Athenian victory o Often reproduced by various groups and organizations o One of the most frequently performed Aristophanic comedy * The Lysistrata Project: In 2003; 1000 readings of Lysistrata were held worldwide to protest Iraq War * Performed in Wales by Mid Powys Youth Theatre o Converted into a musical by Chris Tilley o Converted to a rock opera called "Lysistrata's War" o Another version by the ART company o Another version by Indiana University: Department of Theatre and Drama * Your plans for a modern production of Lysistrata o Provide a stark contrast to the ancient Greek versions of Lysistrata o Performances by men and women o Performed on a modern stage, with curtains, sound and light effects o All people can view the performance o Performances should use modern versions of sexual innuendos o The setting should be World War III: The Struggle for Resources, instead of The Peloponnesian war. ...read more.