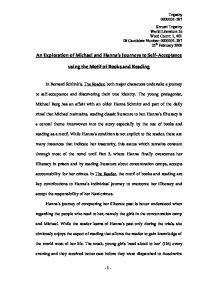 Shrusti Tripathy World Literature 2c Word Count: 1, 401 IB Candidate Number: 0000101-287 25th February 2008 An Exploration of Michael and Hanna's Journeys to Self-Acceptance using the Motif of Books and Reading In Bernard Schlink's, The Reader, both major characters undertake a journey to self-acceptance and discovering their true identity. The young protagonist, Michael Berg has an affair with an older Hanna Schmitz and part of the daily ritual that Michael maintains, reading classic literature to her. Hanna's illiteracy is a central theme interwoven into the story especially by the use of books and reading as a motif. While Hanna's condition is not explicit to the reader, there are many instances that indicate her insecurity, this status which remains constant through most of the novel until Part 3, where Hanna finally overcomes her illiteracy in prison and by reading literature about concentration camps, accepts accountability for her crimes. In The Reader, the motif of books and reading are key contributions to Hanna's individual journey to overcome her illiteracy and accept the responsibility of her Nazi crimes. Hanna's journey of conquering her illiterate past is better understood when regarding the people who read to her, namely the girls in the concentration camp and Michael. While the reader learns of Hanna's past only during the trials, she obviously enjoys the aspect of reading that allows the reader to gain knowledge of the world most of her life. ...read more.

Other works Michael read were Schnitzler and Chekhov, both of which have an underlying theme that approaches reality and observes the conscious as opposed to the unconscious. These books illustrate the war to be the reality and underline the relationship between the Nazi generation and post-war generation, where the latter is the unconscious. Basically, due to the lack of context regarding the war within the post-war generation, they are 'unconscious' of the realities of war and thus, can neither identify, nor come to terms with this open wound on their history. Additionally, due to Michael's middle-class upbringing, the books he chooses to read are bourgeois literature and never considers reading experimental literature, where he does not 'recognize the story or like any of the characters' (185). Since Michael's character represents the post-war generation, his reluctance to experiment shows his generation's intolerance towards the Nazi generation, where they rebuffed their reasons for their actions. Schlink's use of specific bourgeois books that Michael reads to Hanna describes the generational gap between Nazi and post-war Germany. Schlink shows Hanna's eventual overcoming of the obstacle of illiteracy in her journey in the development of her handwriting. When Hanna sends Michael the first note, Michael analyzed the effort that was involved in her writing as her 'hand didn't want to go anywhere and had to be forced' (188) ...read more.

The exploration of literature is a metaphor for the examination of the past, which Hanna does, thus, redefining herself to acknowledge the past, to break out of her cocoon of routine in terms of her excessive cleansing. Hanna's journey is initially to overcome her insecurity of her illiteracy by teaching herself to read and write and secondly, to accept accountability for her Nazi crimes. Bernard Schlink's The Reader, conveys Hanna's odyssey through the motif of books and reading, towards acceptance of her Nazi crimes and overcoming the obstacle of illiteracy by teaching herself to read and write. Initially, her dependence on the young girls and Michael to read aloud to her makes her insecure about her illiteracy and after the trial, this insecurity changes into determination when she teaches herself to read and write using Michael's tapes. The evolution of her handwriting is a metaphor for the progression of her literacy as she became more fluid in her writing. In fact, the choices of their books exhibit the factors of their generation, as Michael, brought up in a bourgeois household reads classics and doesn't believe in experimental literature, and for all intents and purposes, snubbing the Nazi generation for their actions or their inactions. However, Hanna's character, who reads experimental literature to understand her past shows that the Nazi generation can accept responsibility for their actions by facing up their past. ...read more.