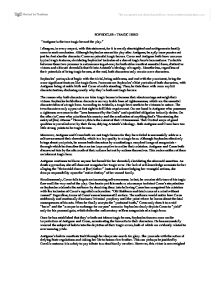 Antigone is the true tragic hero of the play

SOPHOCLES - TRAGIC HERO "Antigone is the true tragic hero of the play." I disagree, in every respect, with this statement, for it is overtly shortsighted and ambiguous to hastily come to such conclusion. Although Sophocles names his play after Antigone, he aptly incorporates not just her but also the character Creon as potential tragic heroes. Creon and Antigone both have common typical tragic features, elucidating Sophocles' inclusion of a duo of tragic hero's incarnations. To decide between these two personae is a strenuous tug-of-war, for both sides manifest essential flaws, distinctive virtues and ultimate downfalls that fit into Aristotle's ideology of tragedy. Nonetheless, regardless of their potentials of being tragic heroes, at the end, both characters only remain mere characters. Sophocles' portrayals of begin with the trivial, being nobleness, and end with the prominent, being the more significant features like tragic flaws. Foremost are Sophocles' elitist portraits of both characters, with Antigone being of noble birth and Creon of noble standing. Then, he tints them with more explicit characterisation, disclosing exactly why they're both not tragic heroes. The reason why both characters are false tragic heroes is because their shortcomings outweigh their virtues. ...read more.

Antigone's hubris manifests itself through her desperate search for glory. She proceeds with the action of defying State regulations and risking her life to honour her brother. This can perhaps be justified by Greek's customs: it is a duty to pay tribute to a dead family member. However, this virtue is overweighed by Antigone's apparent hubris. It remains her gravest flaw, as it is most probable that she has done this for a "noble" death, not for reverence or sustainment of family customs. Antigone is clearly far more fixated upon the idea of glory than reverence. Her id�e fixe revolves around her obsessive declarations: "it is noble for me to die doing this" and "I will [not] suffer... an ignoble death." To her, it is crucial to flaunt herself affectedly, showing that she is "noble by birth" and not "a coward from a noble family." Meanwhile, Creon's hubris morphs itself from steadfast command to extreme dictatorship, encapsulating how he's increasingly sucked into this flaw. Throughout the play, Sophocles positions Creon in a state of high-handed authority. Creon ceaselessly rules Thebes tyrannically, being the single "one command" that "[summons]" a vast "council of elders." ...read more.

Creon is responsible for prioritize his state and his will before the Gods, thus the blasphemous statement "you will not bury that man in a tomb, not even if the eagles of Zeus care to plunder the carrion body and take it to the throne of Zeus." On the contrary, Antigone prioritizes the honouring of the Gods before state duties, for she risks "[transgressing] the decree and power of the king" to honour "the laws [of] the Gods." To draw to a conclusion, neither character - Creon or Antigone - is an inherent tragic hero of Sophocles' play. Each of them is illustrated to be closer to the characterization of an antagonist than a protagonist, for their flaws overweigh their virtues. The reason why Sophocles has embodied such unorthodox portrayal is because it helps him to vividly capture the truly prominent themes of both 442 BC Greece in particular and the universe as a whole that are the issues about political power, celestial glory, gender, family duties, and morals. By highlighting both characters' errors, he brings to the fore the battle between law and nature, mortal and immortal, state and religion. He also accentuates their fatal flaws to embody human finitude. ...read more.